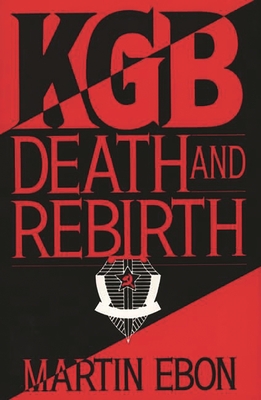 It was official. In 1991, two months after an abortive coup in August, the KGB was pronounced dead. But was it really? In KGB: Death and Rebirth, Martin Ebon, a writer long engaged in the study of foreign affairs, maintains that the notorious secret police/espionage organization is alive and well. He takes a penetrating look at KGB predecessors, the KGB at the time of its supposed demise, and the subsequent use of segmented intelligence forces such as border patrols and communications and espionage agencies. Ebon points out that after the Ministry of Security resurrected these domestic KGB activities, Yevgeny Primakov's Russian Foreign Intelligence Service (FIS) assumed foreign policy positions not unlike its predecessor's. Even more important, Ebon argues, spin-off secret police organizations--some still bearing the KGB name--have surfaced, wielding significant power in former Soviet republics, from the Ukraine to Kazakhstan, from Latvia to Georgia.

How did the new KGB evolve? Who were the individuals responsible for recreating the KGB in its new image? What was the KGB's relationship with Mikhail Gorbachev during his regime? Did Boris Yeltsin plan a Russian KGB, even before the August coup? What has been the role of KGB successor agencies within the independence movements in Azerbaijan, Armenia and Georgia? How has Yevgeny Primakov influenced foreign intelligence activity? What is the role of the FIS in Iran? What does the future hold? Martin Ebon meets these provocative questions head-on, offering candid, often surprising answers and new information for the curious--or concerned--reader. While the Cold War is over, Ebon cautions, the KGB has retained its basic structure and goals under a new name, and it would be naive to believe otherwise.

MARTIN EBON served with the U.S. Office of War Information during World War II. He was subsequently on the staff of the Foreign Policy Association and, during the Korean War, was with the U.S. Information Agency. Ebon has lectured on world affairs and communist tactics, in particular, at New York University and the New School for Social Research. He is the author or editor of more than sixty books, and his numerous articles have appeared in such publications as the New York Times, Psychology Today, and the International Journal of Intelligence and Counterintelligence.
Loading...
or support indie stores by buying on