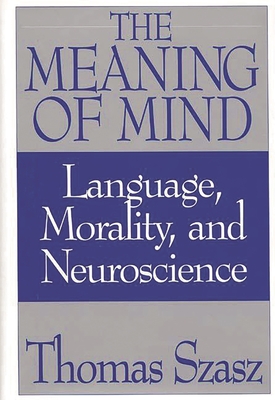 The Meaning of Mind

In this brilliantly original and highly accessible work, Thomas Szasz demonstrates the futility of analyzing the mind as a collection of brain functions. Instead of trying to unravel the riddle of a mythical entity called the mind, Szasz suggests that our task should be to understand and judge persons always as moral agents responsible for their own actions, not as victims of brain chemistry. This is Szasz's most ambitious work to date. In his best-selling book, The Myth of Mental Illness, he took psychiatry to task for misconstruing human conflict and coping as mental illness. In Our Right to Drugs, he exposed the irrationality and political opportunism that fuels the Drug War. In The Meaning of Mind, he warns that we misconstrue the dialogue within as a problem of consciousness and neuroscience, and do so at our own peril.

In The Meaning of Mind, Thomas Szasz argues that only as a verb does the word mind mean something in the real world, namely, attending or heeding. Minding is the ability to pay attention and adapt to one's environment by using language to communicate with others and oneself. Viewing the mind as a potentially infinite variety of self-conversations is the key that unlocks many of the mysteries we associate with this concept. Modern neuroscience is a misdirected effort to explain mind in terms of brain functions. The claims and conclusions of the diverse academics and scientists who engage in this enterprise undermine the concepts of moral agency and personal responsibility. Szasz shows that the cognitive function of speech is to enable us to talk not only to others but to ourselves (in short, to be our own interlocutor), and that the view that mind is brain--embraced by both the scientific community and the popular press--is not an empirical finding but a rhetorical ruse concealing humanity's unceasing struggle to control persons by controlling the vocabulary. The discourse of brain-mind, unlike the discourse of man as moral agent, protects people from the dilemmas intrinsic to holding themselves responsible for their own actions and holding others responsible for theirs. Because we live in an age blessed by the fruits of materialist science, reductionist explanations of the relationship between brain and mind are more popular today than ever, making this book an indispensible addition to the seemingly recondite debate about, simply, who we are.

THOMAS SZASZ, Professor of Psychiatry Emeritus at the State University of New York Health Science Center in Syracuse, New York, is the author of 23 books, among them the classic, The Myth of Mental Illness (1961), and Our Right To Drugs (Praeger, 1991).
Loading...
or support indie stores by buying on