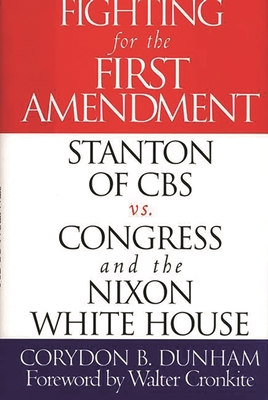 Fighting for the First Amendment

Stanton of CBS Vs. Congress and the Nixon White House

Here is an inside look at how a Congressional Committee, supported by the Nixon White House, sought to establish control over broadcast news by investigating editorial news judgment. Frank Stanton, legendary President of CBS, refused to produce outtakes from the award-winning documentary, The Selling of the Pentagon, subpoenaed by the Committee in an attempt to condemn the program and CBS. The Committee voted to hold Stanton and CBS in contempt, and the House of Representatives held a full debate on its power to investigate and control broadcast news. Had Stanton not taken up the fight he describes to gain First Amendment protection, broadcast news would have been shaped by Congressional hearings and intimidation. Will new electronic media publishers resist such government efforts on the Information Superhighway? Fighting for the First Amendment can serve as a model for that struggle.

Finally Stanton's story is told in his own words in this extraordinary account of his fight to secure First Amendment freedom for the news media. This remarkable book examines the ongoing conflict between media and government and dismisses the theory that press regulation by a government agency is desirable. CBS's fight over The Selling of the Pentagon clearly illustrates how government interference can keep vital information from the public. Broadcast news history shows that press regulations are not benign--despite government claims--and once they are in place, neither great resources nor the urgent need for truth may fully remove them. As public opinion polls show increasing support for such regulations, Stanton's story serves as a timely reminder of the need for a press free of government interference as print, cable, broadcast and satellite news move onto the Information Superhighway.

CORYDON B. DUNHAM was Executive Vice President and General Counsel of NBC for many years. Currently he is Counsel to Cahill Gordon & Reindel and has served as Guest Scholar at the Woodrow Wilson International Center for Scholars. He is the author of numerous articles on issues related to free press and communications.
Loading...
or support indie stores by buying on