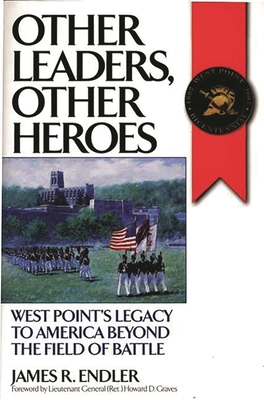 Other Leaders, Other Heroes

West Point's Legacy to America Beyond the Field of Battle (History; 60)

As West Point celebrates its bicentennial, this study provides examples of significant non-combat contributions made by Military Academy graduates to the development and growth of the United States. It includes a sampling of the accomplishments of the military academy's doctors, clergy, builders, and educators, and tells the story of the statesmen, engineers, industrialists and financiers, artists, and writers who all began their careers at the Military Academy. Their success prompted President Theodore Roosevelt to remark at the centennial celebration that no other educational institution in the land has contributed as many names as West Point has contributed to the honor roll of the nation's citizens. After two hundred years, West Point continues to provide the nation with men, as well as women, of character, trained to undertake the leadership and direction of large enterprises, both in war and peace.

Civilian universities produce graduates who are particularly skilled in their primary subject of academic study. At West Point, that primary subject is leadership. West Point graduates were instrumental in the exploration and mapping of unknown territory west of the Mississippi, as well as the unknown reaches of space. They have been elected or appointed to serve at every level of federal, state, and local government, from the office of the president to local boards of education. Graduates of West Point, the sole engineering institution in the nation until 1824, were selected to head the new engineering schools established at some of the nation's most prestigious universities, including Yale and Harvard. Readers will be surprised at the wide range of contributions that Academy graduates have made in our nation's history.

JAMES R. ENDLER attended the Carnegie Institute of Technology, Columbia University, and was graduated from the United States Military Academy at West Point. Commissioned in the Corps of Engineers, he served with the 5th Regimental Combat team in Korea, and then at posts within the United States. Upon his return to civilian life, he entered the real estate and construction industry. During his career, he served as the project executive responsible for the construction management of New York City's 110-story twin tower World Trade Center, Detroit's multi-building Renaissance Center, and Disney's EPCOT Center in Orlando. He now lives in the Hudson Highlands.
Loading...
or support indie stores by buying on