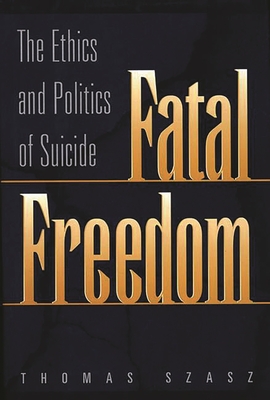 The Ethics and Politics of Suicide

Fatal Freedom is an eloquent defense of every individual's right to choose a voluntary death. The author, a renowned psychiatrist, believes that we can speak about suicide calmly and rationally, as he does in this book, and that we can ultimately accept suicide as part of the human condition. By maintaining statutes that determine that voluntary death is not legal, our society is forfeiting one of its basic freedoms and causing the psychiatric/medical establishment to treat individuals in a manner that is disturbingly inhumane according to Dr. Szasz. His important work asks and points to clear, intelligent answers to some of the most significant ethical questions of our time:

- Is suicide a voluntary act?

- Should physicians be permitted to prevent it?

- Should they be authorized to abet it?

The author's thoughtful analysis of these questions consistently holds forth patient autonomy as paramount; therefore, he argues, patients should not be prevented from exercising their free will, nor should physicians be permitted to enter the process by prescribing or providing the means for voluntary death.

Dr. Szasz predicts that we will look back at our present prohibitory policies toward suicide with the same amazed disapproval with which we regard past policies toward homosexuality, masturbation, and birth control. This comparison with other practices that started as sins, became crimes, then were regarded as mental illnesses, and are now becoming more widely accepted, opens up the discussion and understanding of suicide in a historical context. The book explores attitudes toward suicide held by the ancient Greeks and Romans, through early Christianity and the Reformation, to the advent of modern psychiatry and contemporary society as a whole. Our tendency to define disapproved behaviors as diseases has created a psychiatric establishment that exerts far too much influence over how and when we choose to die. Just as we have come to accept the individual's right to birth control, so too must we accept his right to death control before we can call our society humane or free.

THOMAS SZASZ is Professor of Psychiatry Emeritus at State University of New York Health Science Center in Syracuse. He is widely recognized as the world's foremost critic of psychiatric coercions and excuses and as a leading philosopher of liberty-and-responsibility. He is the author of 24 books, including The Myth of Mental Illness (1961) and Our Right to Drugs: The Case for a Free Market (Praeger, 1992).
Loading...
or support indie stores by buying on