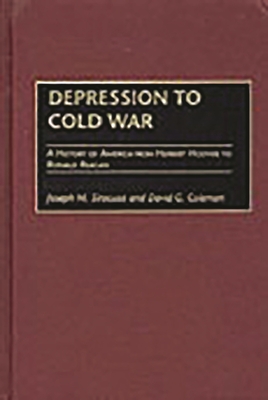 Organized around the office of the president, this study focuses on American behavior at home and abroad from the Great Depression to the onset of the end of the Cold War, two key points during which America sought a re-definition of its proper relationship to the world. Domestically, American society continued the process of industrialization and urbanization that had begun in the 19th century. Urban growth accompanied industrialism, and more and more Americans lived in cities. Because of industrial growth and the consequent interest in foreign markets, the United States became a major world power. American actions as a nation, whether as positive attempts to mold events abroad or as negative efforts to enjoy material abundance in relative political isolation, could not help but affect the course of world history.

Under President Hoover, the federal government was still a comparatively small enterprise; challenges of the next six decades would transform it almost beyond belief, touching in one way or another almost every facet of American life. Before the New Deal, few Americans expected the government to do anything for them. By the end of the Second World War and in the aftermath of the Great Depression, however, Americans had turned to Washington for help. Even the popular Reagan presidency of the 1980s, the most conservative since Hoover, would fail to undo the basic New Deal commitment to assist struggling Americans. There would be no turning back the clock, at home or abroad.

JOSEPH M. SIRACUSA is a Visiting Research Fellow in the Key Centre for Ethics, Law, Justice and Governance, Griffith University, Brisbane, Australia. Among his books are A History of United States Foreign Policy, America's Australia: Australia's America, and Into the Dark House: American Diplomacy and the Idealogical Origins of the Cold War.DAVID G. COLEMAN is Assistant Professor at the Miller Center of Public Affairs at the University of Virginia. He is co-editor of The Presidential Recordings: John F. Kennedy (forthcoming).
Loading...
or support indie stores by buying on