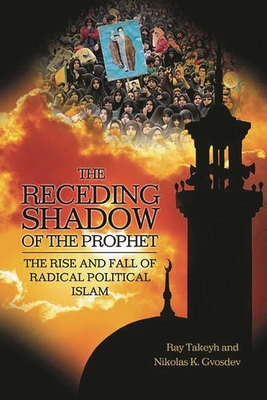 The Receding Shadow of the Prophet

The Rise and Fall of Radical Political Islam

The tragic events of September 11, 2001, in the United States renewed fears of an Islamist wave destabilizing the countries of the Muslim world. Yet the alarm raised over a previous wave of Islamism in the early 1990s, which threatened to overwhelm Egypt and Algeria and spill into the Balkans and Central Asia, proved to be unfounded. Takeyh and Gvosdev assert that while Islamism has been successful as an oppositional ideology of wrath, it has failed to provide Islamic societies with any feasible alternative to undertaking fundamental political and economic reforms. By detailing the defeat of Islamist movements in the Middle East, the Balkans, and Central Asia over the last decade, this book encourages us not to overestimate the Islamist threat in the current climate and the years to come.

Radical Islamists have been successful in mobilizing opposition to corrupt regimes, yet they have failed to translate their utopian vision into reality. Furthermore, their emphasis on violence alienates and frightens the middle class and other potential allies. Iran's revolution failed to create a model Islamic republic, and its government is increasingly losing legitimacy to demands for genuine democracy. Islamist governments in Afghanistan and Sudan relied upon violence to remain in power and ultimately collapsed. Islamist movements proved unable to dislodge the existing regimes in Egypt and Algeria. In the Balkans and Central Asia, Islamism has had little attraction for Western-oriented populations. Indeed, throughout the entire Islamic world, former radicals are seeking a new accommodation between Islamic values and liberal democracy. Takeyh and Gvosdev succinctly and accessibly explore the rise of radical Islam, as well as its ultimate demise in various nations.

RAY TAKEYH is Professor and Director of studies at the Near East and South Asia Center of the National Defense University and author of The Origins of the Eisenhower Doctrine: The U.S., Britain, and Nasser's Eqypt, 1953-57.NIKOLAS K. GVOSDEV is Executive Editor of The National Interest and a senior fellow for strategic studies at the Nixon Center. His most recent work is Civil Society and the Search for Justice in Russia.
Loading...
or
Not Currently Available for Direct Purchase