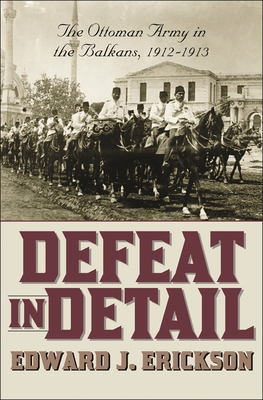 No critical analysis has ever examined the specific reasons for the Ottoman defeat. Erickson's study fills this gap by studying the operations of the Ottoman Army from October 1912 through July 1913, and by providing a comprehensive explanation of its doctrines and planning procedures. This book is written at an operational level that details every campaign at the level of the army corps. More than 30 maps, numerous orders of battle, and actual Ottoman Army operations orders illustrate how the Turks planned and fought their battles. Of particular note is the inclusion of the only detailed history in English of the Ottoman X Corps' Sarkoy amphibious invasion. Also included are definitive appendix about Ottoman military aviation and a summary of the Turks' efforts to incorporate the lessons learned from the war into their military structure in 1914.

The Ottoman Empire fought the Balkan Wars of 1912-1913 against the joint forces of Bulgaria, Greece, Montenegro, and Serbia--and was decisively defeated. The Ottoman Army is frequently depicted as a mob of poorly clad, faceless Turks inept in their attempts to fight a modern war. Yet by 1912, the Ottoman Army, which was constructed on the German model, was in many ways more advanced than certain European armies.

EDWARD J. ERICKSON, is the author of Ordered to Die (Praeger, 2000).
Loading...
or support indie stores by buying on