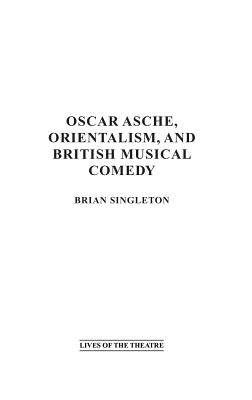 This book tells the story of producer, actor, and author Oscar Asche, one of the most commercially successful actor/managers in the first half of the 20th century. Though virtually written out of theatre history because of his triumph on the musical comedy stage, he is most frequently remembered today as having had a successful career as an actor and producer of Shakespeare. Asche was an innovator in stage lighting and one of the first to use it as a language of the stage rather than as mere illumination. During World War I, he captured the public imagination and provided audiences with escapist musicals set in fictional orients.

Oscar Asche excelled in many theatre genres, including musical comedy, pantomime, music hall, melodrama, and Shakespeare. He provided exotic erotica in orientalist musicals from Kismet to Mecca and brought unprecedented numbers of spectators to the theatre at its most difficult time. He was responsible for extending the life of musical comedy and orientalism in the theatre before cinemas would appropriate both genre and style.

BRIAN SINGLETON is Head of the School of Drama, Trinity College, Dublin, and Vice-President of the International Federation for Theatre Research. He has published widely in journals such as Modern Drama, Theatre Journal, Theatre Research International, and others.
Loading...
or support indie stores by buying on