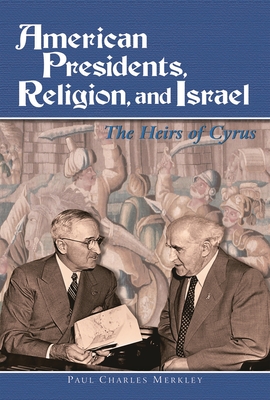 The Heirs of Cyrus

Shortly after the end of the Second World War, President Harry S Truman declared his support for the creation and maintenance of the modern state of Israel, basing that support on religious and theological grounds. This is the first book to explore the connection between the religious backgrounds and beliefs of U.S. presidents in relation to their policies toward Israel. From Truman to Ford, U.S. presidents relied, in part, on their religious and moral commitments to support their policies and views toward Israel. Beginning with Carter, however, presidents have abandoned the role of champions of Israel to become champion of the Peace Process, stressing peace and a secular approach that rises above the religious and theological fray. And yet, even in the context of this attempted fair-mindedness, U.S. presidents reveal their personal religious and moral beliefs in their responses to the issue of Israel. Today, George W. Bush, one of the most vocally religious presidents, seems poised to take up the tradition once again of relying on his religious convictions to justify his positions toward the Arab-Israeli conflict. Here, Merkley argues that while faith alone does not determine action, or that it even has a controlling influence, religious belief does play a role in the policies that U.S. presidents, and the nation, adopt toward Israel.

When Truman declared, I am Cyrus, he was emphatically grounding his support of the modern state of Israel in his belief in the Bible. Referring to the Persian king who allowed the Jews to return to Israel, and to build the Second Temple, Truman revealed his religious commitments and supported his policies on biblical grounds. Bringing to the fore neglected evidence of the role of religious belief in policies toward Israel, Merkley explores an overlooked aspect of presidential decision-making, suggesting that religion, while not the only factor, is at least among the influences that determine a president's view of the Arab-Israeli conflict. From Truman to Ford, policies often reflected the Evangelical traditions that dictated unyielding support of Israel, but with Carter's commitment to the peace process above all else, the trend turned toward moral absolutes and more general religious beliefs that could sustain arguments for a negotiated peace. George W. Bush, thus far, however, has clearly demonstrated his personal religious beliefs and may, in the end, reclaim the mantle of Cyrus.

PAUL CHARLES MERKLEY is Professor Emeritus in History at Carleton University, Ottawa. He is the author of five books including The Politics of Christian Zionism, 1891-1948 and Christian Attitudes towards the State of Israel. He has been a Visiting Professor in Comparative Religion and American Studies at Hebrew University in Jerusalem.
Loading...
or
Not Currently Available for Direct Purchase