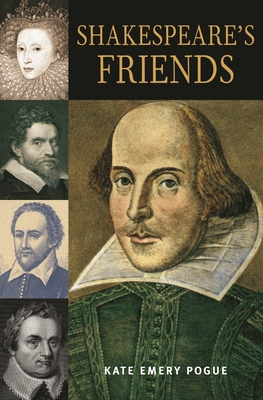 Taking seriously the commonplace that a man is known by the company he keeps--and particularly by the company he keeps over his lifetime--one can learn more about just about anyone by learning more about his friends. By applying this notion to Shakespeare, this book offers insight into the life of the most famous playwright in history, and one of the most elusive figures in literature. The book consists of sketches of Shakespeare's contact and relationships with the people known to have been close friends or acquaintances, revealing aspects of the poet's life by emphasizing ways in which his life was intertwined with theirs. Though it is difficult to get to know this most famous of playwrights, through this work readers can gain insight into aspects of his life and personality that may otherwise have been hidden.

Shakespeare, more than any other writer in the western world, based much of his work on the consequences of friendship. Given the value placed on friends in his writing, many readers have wondered about the role friendship played in his own life. This work gives readers the chance to learn more about Shakespeare's friends, who they were and what they can tell us about Shakespeare and his times. For instance, Richard Field was a boyhood friend with whom Shakespeare went to school in Stratford. Field became a well-known London printer. The details of Field's life illuminate both the details of Shakespeare's boyhood education and the poet's relationship with the printing, publishing, and book-selling world in London. Francis Collins, a lawyer who represented Shakespeare in a number of legal dealings, drafted both versions of Shakespeare's will. This life-long friend was one of the last men eve to see Shakespeare pick up a pen to write. Through these vivid and animated sketches, readers will come to know about Shakespeare's life and times.

While the book has a lively, accessible narrative tone within chapters, its organization and features make it highly useful to the school library market as well as the academic world. It contains cross references, a detailed Table of Contents and a highly organized structure with uniformity across sections and chapters. The writing is accessible and could be easily used by upper-level high school students looking to augment school assignments.

Kate Emery Pogue is Adjunct Professor in the Department of Drama, University of Houston Downtown. She is a playwright, Shakespearean actress, teacher, producer, and director. For ten years she was the Artistic Director of the Shakespeare-by-the-Book Festival. In addition to the 14 productions she directed for that company, she has directed for the Houston Shakespeare Festival, Summer Shakespeare at Notre Dame, Bucknell University, Houston Community College, and the University of Houston Downtown. She founded and for 20 years was head of the Drama Department at Houston Community College Central College, and on a grant from the National Endowment for the Humanities, she was one of 18 teachers selected nation-wide to participate in the Folger Shakespeare Library's Teaching Shakespeare through Performance project.
Loading...
or
Not Currently Available for Direct Purchase