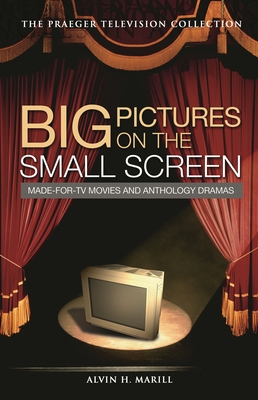 Big Pictures on the Small Screen

In the years immediately following World War II, NBC's legendary David Sarnoff and his cross-town equal, CBS's William S. Paley, decided that American television would be identified with quality live drama surrounded by news, light entertainment (in the form of variety and quiz shows), and family-oriented series generally spun off from radio. That initial vision eroded over the years and decades, but the dramatic part of this equation endured well into the 1960s, when, with NBC's Project 120 (which commissioned movies expressly for television in 120-minute doses), the genres known as Movies Made for Television and the miniseries emerged. Today, as Angels in America, Band of Brothers, Into the West, and Lackawanna Blues continue to draw huge cable audiences, the television movie and anthology drama is now in a unique position to represent, in a simple and direct way, the various states of the television industry itself over the past 60 years. This volume covers all of the important landmarks in the genre, from Kraft Television Theater to Roots to Rome, and provides a parallel history of the relevant events in television and American culture that helped to ensure the popularity and viability of this genre over time.

Until the early 1980s-when Cable began fragmenting the television audience-the three major networks had the airwaves mainly to themselves; but with Cable now on the scene, dramatic productions began falling victim to the bottom line. But just when it seemed that Cable was finally going to succeed in killing off such programming forever, it has itself come to play the savior to the genre; and now pay cable channels like HBO and Showtime (not subject to the same FCC restrictions as the original networks) thrive on such dramas as Angels in America, Band of Brothers, Into the West, and Lackawanna Blues. After making its several transitions across channels and decades and formats, the television movie is now in a unique position to represent, in a simple and direct way, the various states of the television industry itself over the past 60 years.

Alvin H. Marill has spent his career in broadcasting, direct marketing, the recording industry, and publishing. He is the author of more than two-dozen books dealing with stage, screen, and television, including the encyclopedic Movies Made for Television and its several updates through 2004, long considered the definitive compilation of the genre. Among his other works are More Theatre: Stage to Screen to Television, The Complete Films of Edward G. Robinson, Robert Mitchum on the Screen, Samuel Goldwyn Presents, and Career Studies of Anthony Quinn, Sidney Poitier, Tyrone Power, The Three Stooges, and Tommy Lee Jones, as well as The Ultimate John Wayne Trivia Book and the screen music compendium Keeping Score: Film Music 1988-1997.
Loading...
or support indie stores by buying on