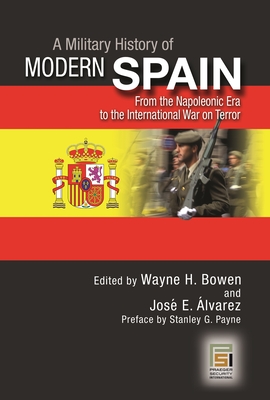 From the Napoleonic Era to the International War on Terror (Military History Of...)

In the 19th and 20th centuries, Spain was a key player in the military conflagrations that created modern Europe. From the Napoleonic Wars, through the dress rehearsal for World War II that was the Spanish Civil War, to the grim struggle against terrorism today, the military history of modern Spain has both shaped and reflected larger forces beyond its borders.

This volume traces the course of Spanish military history, primarily during the 20th century. Chapter 1 provides the foundation for the role of the Spanish Army at home (the War of Independence Napoleonic War], the Carlist Wars, and pronunciamientos), abroad (Morocco, 1859-60), and as an instrument for Liberal reforms in Spain. Chapter 2 covers the period following the Spanish-American War as the Army redirected its focus to the Spanish Protectorate in northern Morocco. This chapter covers the Rif Rebellion (1921-27), the dictatorship of Miguel Primo de Rivera (1923-30) and concludes with the end of the monarchy and the establishment of the 2nd Republic in 1931. Chapters 3 and 4 present the two armies of the Spanish Civil War, as well as their relationship to the warring factions of Nationalists and Republicans. Chapter 5 looks at the Spanish Army during World War II on the Eastern Front (Russia), in its overseas colonies, as well as in Spain. De-colonialism is covered in chapter 6 as Spain, following the lead of the other European powers, began to shed itself of its African empire. Chapter 8 charts Spain's integration into the Western defense community in the 1950s, its membership in NATO, and its participation in peacekeeping and humanitarian missions in the Balkans and the Middle East. Chapter 9 focuses on Spain's struggle against terrorism, both the domestic Basques of ETA (Fatherland and Liberty) and the newer conflict against al-Qaeda and radical Islamic fundamentalism.