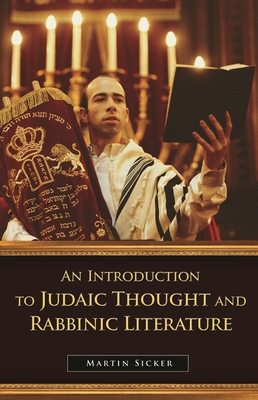 An Introduction to Judaic Thought and Rabbinic Literature

Many people have heard the term Talmud but have little or no idea what it is, what it contains, and why it was written; moreover, few have ever actually looked into one of its works, and even fewer would make any sense of it if they did. Here, Sicker provides readers with insight into the nature and history of Judaic thought and its literature through illustrative examples and clear explanations. Rabbinic literature is important, even to those who are not religiously inclined, because it alone represents the embodiment of the intellectual legacy that has contributed enormously to the survival and continuity of the Jewish people. Through two thousand years of dispersion, rabbinic literature was the primary link to the past and provided hope for the future. It was, in effect, the intellectual homeland of a people scattered throughout the world. Even if one has never read any Judaic literature, he or she will have some notion of what it is after reading this book.

This book is written for the vast majority of adults who either attend synagogue or have a general interest in Judaism, whether Jewish or not. It provides insight into the meaning of terms that are used in sermons, lectures, and articles, such as Torah, halakhah, midrash, Talmud, and Jewish law, all of which are component elements of rabbinic literature. Sicker explains the meaning of these and other terms, the bodies of literature they refer to, and the historical linkage between them in an easy, accessible manner. In a sense, this book is not only a guide to the literature, but also an intellectual history of Judaic thought and culture that should be of interest to anyone even slightly curious about how Judaism managed to survive for millennia without central institutions or clerical hierarchy.

Martin Sicker is author of over 30 books on Jewish and Middle East history, geopolitics, political theory, and Biblical studies. He is a private consultant, writer, and lecturer. His books include The Rise and Fall of the Ancient Israelite States, Political Culture of Judaism, The Islamic World in Ascendency, The Middle East in the Twentieth Century, and many others.
Loading...
or support indie stores by buying on