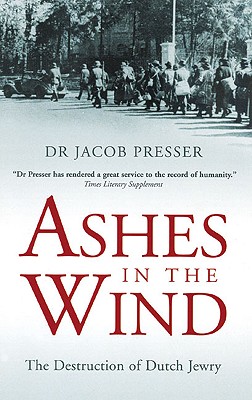 Ashes in the Wind

The Destruction of Dutch Jewry

Setting out the processes that allowed the Nazis to perpetuate mass murder, this detailed history documents the destruction of Dutch Jewry, from isolation to deportation and, ultimately, extermination. Focusing on a country often forgotten in Holocaust histories, this comprehensive account describes how 110,000 Jews were deported from the Netherlands to concentration camps in 1940 but less than 6,000 returned at the end of the war. Utilizing 15 years of research and documents from the Netherlands State Institute for War Documentation, the incremental demands on Jewish citizens are analyzed—starting with forced registry and ending with death at concentration camps—while demonstrating how this slow progression led the Germans involved to accept these atrocities. Graphically recounting stories of persecution, going into hiding, and life in the transit camps, it conveys the despair experienced as families and lives were destroyed, while showing how these stories fit into a wider, global picture. This newly updated version also provides additional information on Dr. Presser himself and how he wrote this book.


Praise For Ashes in the Wind: The Destruction of Dutch Jewry…

"Dr. Presser has rendered a greats service to the record of humanity . . . a monument to the memory of the Jewish citizens of Holland who were massacred."  —Times Literary Supplement

Dr. Jacob Presser was forced to live in hiding from 1943 to 1945 to escape the Nazi occupation during the Netherlands. After the war, he was a professor of modern history at the University of Amsterdam.
Loading...
or
Not Currently Available for Direct Purchase