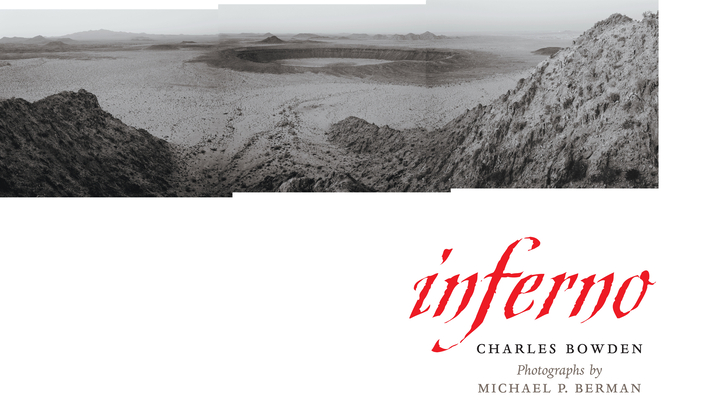 One of America's foremost environmental writers joins with an acclaimed landscape photographer to create an unmatched portrait of the Sonoran Desert in all its harsh beauty.

Charles Bowden has been an outspoken advocate for the desert Southwest since the 1970s. Recently his activism helped persuade the U.S. government to create the Sonoran Desert National Monument in southern Arizona. But in working for environmental preservation, Bowden refuses to be one who "outline[s] something straightforward, a manifesto with clear rules and a set of plans for others to follow." In this deeply personal book, he brings the Sonoran Desert alive, not as a place where well-meaning people can go to enjoy "nature," but as a raw reality that defies bureaucratic and even literary attempts to define it, that can only be experienced through the senses.

Inferno burns with Charles Bowden's passion for the desert he calls home. "I want to eat the dirt and lick the rock. Or leave the shade for the sun and feel the burning. I know I don't belong here. But this is the only place I belong," he says. His vivid descriptions, complemented by Michael Berman's acutely observed photographs of the Sonoran Desert, make readers feel the heat and smell the dryness, see the colors in earth and sky, and hear the singing of dry bones across the parched ground.

Written as "an antibiotic" during the time Bowden was lobbying the government to create the Sonoran Desert National Monument, Inferno repudiates both the propaganda and the lyricism of contemporary nature writing. Instead, it persuades us that "we need these places not to remember our better selves or our natural self or our spiritual self. We need these places to taste what we fear and devour what we are. We need these places to be animals because unless we are animals we are nothing at all. That is the price of being a civilized dude."

Charles Bowden is one of today's premier writers on the American environment and social issues along the U.S.-Mexico border. His recent books include A Shadow in the City: Confessions of an Undercover Drug Warrior; Down by the River: Drugs, Money, Murder, and Family; Blues for Cannibals: Notes from Underground; Blood Orchid: An Unnatural History of America; and Desierto: Memories of the Future. He lives in Tucson, Arizona.

Michael P. Berman is a photographer and artist who lives in San Lorenzo, New Mexico. His work is in the permanent collections of many American museums, including the Metropolitan Museum of Art, the Museum of Fine Arts, Houston, the Center for Creative Photography in Tucson, and the Museum of Photographic Arts in San Diego.