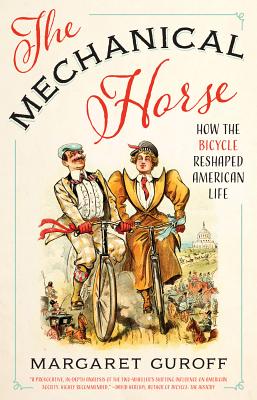 How the Bicycle Reshaped American Life

With cities across the country adding miles of bike lanes and building bike-share stations, bicycling is enjoying a new surge of popularity in America. It seems that every generation or two, Americans rediscover the freedom of movement, convenience, and relative affordability of the bicycle. The earliest two-wheeler, the draisine, arrived in Philadelphia in 1819 and astonished onlookers with the possibility of propelling themselves "like lightning." Two centuries later, the bicycle is still the fastest way to cover ground on gridlocked city streets.

Filled with lively stories, The Mechanical Horse reveals how the bicycle transformed American life. As bicycling caught on in the nineteenth century, many of the country's rough, rutted roads were paved for the first time, laying a foundation for the interstate highway system. Cyclists were among the first to see the possibilities of self-directed, long-distance travel, and some of them (including a fellow named Henry Ford) went on to develop the automobile. Women shed their cumbersome Victorian dresses--as well as their restricted gender roles--so they could ride. And doctors recognized that aerobic exercise actually benefits the body, which helped to modernize medicine. Margaret Guroff demonstrates that the bicycle's story is really the story of a more mobile America--one in which physical mobility has opened wider horizons of thought and new opportunities for people in all avenues of life.