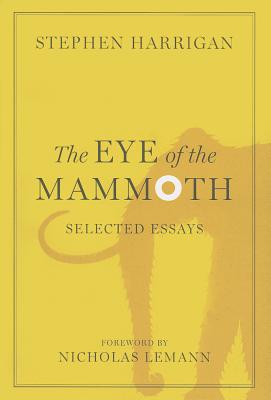 The Eye of the Mammoth

In four decades of writing for magazines ranging from Texas Monthly to the Atlantic, American History, and Travel Holiday, Stephen Harrigan has established himself as one of America's most thoughtful writers. In this career-spanning anthology, which gathers together essays from two previous books--A Natural State and Comanche Midnight--as well as previously uncollected work, readers finally have a comprehensive collection of Harrigan's best nonfiction.

History--natural history, human history, and personal history--and place are the cornerstones of The Eye of the Mammoth. But the specific history or place varies considerably from essay to essay. Harrigan's career has taken him from the Alaska Highway to the Chihuahuan Desert, from the casinos of Monaco to his ancestors' village in the Czech Republic. Texas is the subject of a number of essays, and a force in shaping others, as in "The Anger of Achilles," in which a nineteenth-century painting moves the author despite his possessing a "Texan's suspicion of serious culture." Harrigan's deceptively straightforward voice, however, belies an intense curiosity about things that, by his own admission, may be "unknowable." Certainly, we are limited in what we can know about the inner life of George Washington, the last days of Davy Crockett, or the motives of a caged tiger, but Harrigan's gift--a gift that has also made him an award-winning novelist--is to bring readers closer to such things, to make them less remote, just as a cave painting in the title essay eerily transmits the living stare of a long-extinct mammoth.