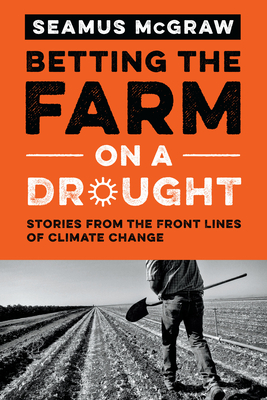 Betting the Farm on a Drought

Stories from the Front Lines of Climate Change

Climate change has become one of the most polarizing issues of our time. Extremists on the left regularly issue hyperbolic jeremiads about the impending destruction of the environment, while extremists on the right counter with crass, tortured denials. But out in the vast middle are ordinary people dealing with stronger storms and more intense droughts than they've ever known. This middle ground is the focus of Betting the Farm on a Drought, a lively, thought-provoking book that lays out the whole story of climate change--the science, the math, and most importantly, the human stories of people fighting both the climate and their own deeply held beliefs to find creative solutions to a host of environmental challenges. Seamus McGraw takes us on a trip along America's culturally fractured back roads and listens to farmers and ranchers and fishermen, many of them people who are not ideologically, politically, or in some cases even religiously inclined to believe in man-made global climate change. He shows us how they are already being affected and the risks they are already taking on a personal level to deal with extreme weather and its very real consequences for their livelihoods. McGraw also speaks to scientists and policymakers who are trying to harness that most renewable of American resources, a sense of hope and self-reliance that remains strong in the face of daunting challenges. By bringing these voices together, Betting the Farm on a Drought ultimately becomes a model for how we all might have a pragmatic, reasoned conversation about our changing climate.

Seamus McGraw has written eloquently about hydraulic fracking and its sometimes devastating effects on landscapes and communities in The End of Country: Dispatches from the Frack Zone. His award-winning writing has also appeared in the New York Times, Huffington Post, Playboy, Popular Mechanics, Reader's Digest, and the Forward, and on Fox Latino.
Loading...
or
Not Currently Available for Direct Purchase