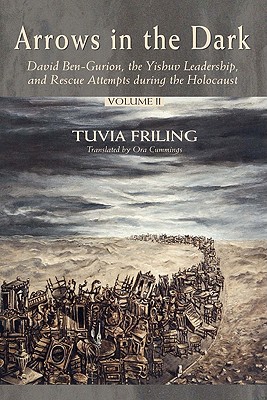 David Ben-Gurion, the Yishuv Leadership, and Rescue Attempts during the Holocaust

Arrows in the Dark recounts and analyzes the many efforts of aid and rescue made by the Jewish community of Palestine—the Yishuv—to provide assistance to European Jews facing annihilation by the Nazis. Tuvia Friling provides a detailed account of the activities carried out at the behest of David Ben-Gurion and the Yishuv leadership, from daring attempts to extract Jews from Nazi-occupied territory, to proposals for direct negotiations with the Nazis. Through its rich array of detail and primary documentation, this book shows the wide scope and complexity of Yishuv activity at this time, refuting the idea that Ben-Gurion and the Yishuv ignored the plight of European Jews during the Holocaust.

Tuvia Friling is senior research fellow and director of the Ben-Gurion Research Center at Ben-Gurion University of the Negev in Israel. Since October 2001, he has served as Israel’s State Archivist. He is the author of numerous scholarly articles on David Ben-Gurion, the Holocaust, and Israeli history.
Loading...
or support indie stores by buying on