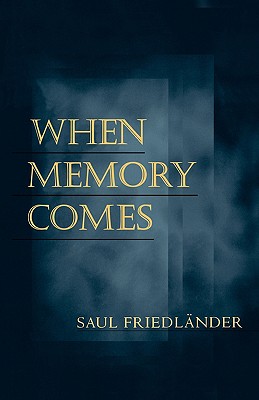 Four months before Hitler came to power, Pavel Friedlander was born in Prague to a middle-class Jewish family. In 1939, seven-year-old Pavel and his family were forced to flee Czechoslovakia for France, but his parents were able to conceal their son in a Roman Catholic seminary before being shipped to their destruction. After a whole-hearted religious conversion, young Pavel began training for priesthood. The birth of Israel prompted his discovery of his Jewish past and his true identity. Friedlander describes his experiences, moving from Israeli present to European past with composure and elegance.
The Wisconsin edition is not for sale in the British Commonwealth or Empire (excluding Canada.)


Praise For When Memory Comes…

"Friedländer undertakes an evocative journey into his past that is likely to leave many a reader shaken."—Amos Elon, New York Times Book Review

"A beautifully written (and beautifully translated) memoir of a tragic childhood."— New Yorker

"A tender elegy which moves from the Israeli present to the European past, from fear to memory, in a mosaic of Proustian images."—New Republic

"The most remarkable feature of When Memory Comes is its composure, an elegance that is unnerving. Friedländer describes his experiences in lean, graceful sentences; his language seems armored against the dissolution it describes."—Leon Wieseltier, The New York Review of Books

Saul Friedlander is the author of many books, including "Nazi Germany and the Jews," "History and Psychoanalysis," and "Memory, History, and the Extermination of the Jews of Europe." A recipient of a MacArthur Foundation Award, he is retired from professorships at Tel Aviv University and the University of Geneva and currently holds the 1939 Club Chair at the University of California, Los Angeles."
Loading...
or
Not Currently Available for Direct Purchase