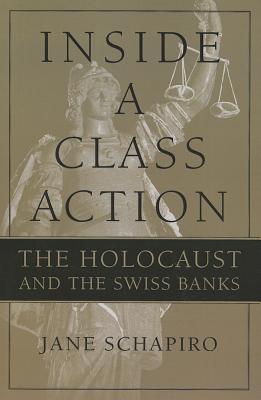 Inside a Class Action

The Holocaust and the Swiss Banks

On October 21, 1996, attorney Michael Hausfeld, with a team of lawyers, filed a class-action complaint against Union Bank of Switzerland, Swiss Bank Corporation, and Credit Suisse on behalf of Holocaust victims. The suit accused the banks of, among other things, acting as the chief financiers for Nazi Germany. On August 12, 1998, the plaintiffs and banks reached a $1.25 billion settlement.            Through detailed research, court transcripts, and interviews with politicians, attorneys, historians, and survivors, Jane Schapiro shows how egos, personalities, and values clashed in this complex and emotionally charged case. Inside a Class Action provides an insider's view of a major lawsuit from its inception to its conclusion and will appeal to anyone interested in human rights, reparations, and international law.

Praise For Inside a Class Action: The Holocaust and the Swiss Banks…

"A must read for anybody interested in the details of how a group of dogged individuals uncovered the truth involving Swiss banks and the Holocaust."—Kenneth R. Feinberg, Georgetown University Law Center

"In her fascinating and moving book . . . Jane Schapiro, who attended the court hearings, Senate and House Banking Committee hearings and press conferences, provides a well-documented account of the litigation itself. Her first-hand knowledge of these lawsuits is masterful."—Barbara S. Cohen, Jewish Book World

Jane Schapiro is the author of a volume of poetry, Tapping This Stone, and a chapbook, Mrs. Cave's House. Her essays and poems have appeared in publications such as The American Book Review, The American Scholar, Prairie Schooner, The Southern Review, The Sun, and Yankee. She lives in Fairfax, Virginia.
Loading...
or
Not Currently Available for Direct Purchase