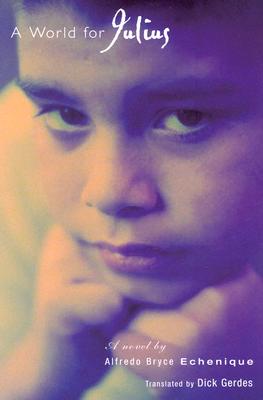 A World for Julius (Paperback)

Julius was born in a mansion on Salaverry Avenue, directly across from the old San Felipe Hippodrome. Life-size Disney characters and cowboy movie heroes romp across the walls of his nursery. Out in the carriage house, his great-grandfather's ornate, moldering carriage takes him on imaginary adventures. But Julius's father is dead, and his beautiful young mother passes through her children's lives like an ephemeral shooting star. Despite the soft shelter of family and money, hard realities overshadow Julius's expanding world, just as the rugged Andes loom over his home in Lima.
This lyrical, richly textured novel, first published in 1970 as Un mundo para Julius, opens new territory in Latin American literature with its focus on the social elite of Peru. In this postmodern novel Bryce Echenique incisively charts the decline of an influential, centuries-old aristocratic family faced with the invasion of foreign capital in the 1950s.
Winner of the Outstanding Translation Award of the American Literary Translators Association and the Columbia University Translation Center Award.

Peruvian writer Alfredo Bryce Echenique is the award-winning author of sixteen works of fiction and nonfiction. Winner of Peru's National Book Award in 1970, Echinque's masterpiece A World for Julius has been translated into thirteen languages and adapted to film and television. His most recent novel, El Huerto de mi Amada (My Beloved Garden), won the 2002 Planeta Award. Echenique divides his time between France and Peru.

Praise For A World for Julius…

"Like the best of Dickens’s novels, A World for Julius is a great, fat book that completely engages a reader with its characters and placesso completely that one reads with that often forgotten childhood pleasure of entering an all-encompassing, almost fairytale country of the imagination."New York Times Book Review