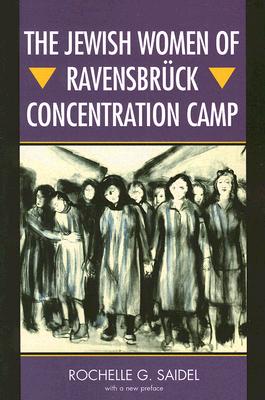 Ravensbrück was the only major Nazi concentration camp for women. Located about fifty miles north of Berlin, the camp was the site of murder by slave labor, torture, starvation, shooting, lethal injection, "medical" experimentation, and gassing.
While this camp was designed to hold 5,000 women, the actual figure was six times this number. Between 1939 and 1945, 132,000 women from twenty-three countries were imprisoned in Ravensbrück, including political prisoners, Jehovah's Witnesses, "asocials" (including Gypsies, prostitutes, and lesbians), criminals, and Jewish women (who made up about 20 percent of the population). Only 15,000 survived.
Drawing upon more than sixty narratives and interviews of survivors in the United States, Israel, and Europe as well as unpublished testimonies, documents, and photographs from private archives, Rochelle Saidel provides a vivid collective and individual portrait of Ravensbrück’s Jewish women prisoners. She worked for over twenty years to track down these women whose poignant testimonies deserve to be shared with a wider audience and future generations. Their memoirs provide new perspectives and information about satellite camps (there were about 70 slave labor sub-camps). Here is the story of real daily camp life with the women’s thoughts about food, friendships, fear of rape and sexual abuse, hygiene issues, punishment, work, and resistance. Saidel includes accounts of the women's treatment, their daily struggles to survive, their hopes and fears, their friendships, their survival strategies, and the aftermath.
On April 30, 1945, the Soviet Army liberated Ravensbrück. They found only 3,000 extremely ill women in the camp, because the Nazis had sent other remaining women on a death march. The Jewish Women of Ravensbrück Concentration Camp reclaims the lost voices of the victims and restores the personal accounts of the survivors.

Rochelle Saidel is founder and executive director of the Remember the Women Institute in New York and senior scientific researcher at the Center for the Study of Women and Gender at the University of São Paulo. She is author of Never Too Late to Remember: The Politics behind New York City's Holocaust Museum and The Outraged Conscience: Seekers of Justice for Nazi War Criminals in America.

Praise For The Jewish Women of Ravensbrück Concentration Camp…

"Saidel's goal is to make visible a previously ignored aspect of women's Holocaust history. . . . In bringing to light the experiences of the women of Ravensbrück concentration camp, Saidel adds to our knowledge of Jewish survival in the genocidal conditions created by the Nazis."—Rochelle G. Ruthchild, Women's Review of Books

"Thanks to Rochelle Saidel's sensitive interviews and meticulous research, together with the many previously unpublished photographs and haunting drawings by the inmates, this book will increase public recognition of Ravensbrück's victims and survivors. With this, The Jewish Women of Ravensbrück Concentration Camp takes its honorable place in the growing genre of gender study of the Holocaust."—Eetta Prince-Gibson, Jerusalem Post

"This is a welcome addition to the Holocaust literature. . . . Readers interested in visual historical materials will appreciate the wide range of photographs and illustrations depicting life in this camp. I expect this book to attract a wide audience."—Nechama Tec, author of Resilience and Courage: Women, Men and the Holocaust

"Rochelle Saidel's The Jewish Women of Ravensbrück Concentration Camp focuses on a portion of the Holocaust that has been submerged in the larger history of a camp associated primarily with political dissidents. This book is the outcome of over twenty years of indefatigable research in archives and libraries, and of interviews in several countries with survivors of Ravensbrück. Saidel presents their deeply moving stories against a carefully constructed context of the camp's history. . . . This book is clearly a labor of deep commitment and love."—Ruth Schwertfeger, author of Women of Theresienstadt and The Wee Wild One