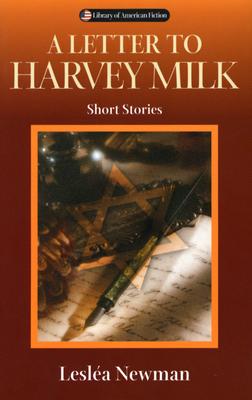 A Letter to Harvey Milk

This poignant and humorous collection of stories offers a fresh perspective on current issues such as homosexuality and anti-Semitism and lends a unique voice to those experiencing growing pains and self-discovery. Newman’s readers accompany her quirky Jewish characters through all types of experiences from an initial lesbian sexual encounter to being sequestered in a college apartment after paranoid Holocaust flashbacks. In these stories characters anxiously discover their lesbian identities while beginning to understand, and finally to embrace, their Jewish heritage. The title story, "A Letter to Harvey Milk," was the second place finalist in the Raymond Carver Short Story Competition.

Praise For A Letter to Harvey Milk: Short Stories (Library of American Fiction)…

"These nine stories focus on an array of Jewish and lesbian concerns with a refreshing candor and lack of self-consciousness.  Although pain plays a part in this volume, many of the tales celebrate with warmth and good humor the courageous maintenance of the Jewish tradition in radical relationships. . . .  Contemporary characters confront both timely issues, like AIDS, and eternal ones, such as a lovers’ quarrel or a mother-daughter misunderstanding." —Publishers Weekly

Lesléa Newman is the author of fifty books including the pioneering work Heather Has Two Mommies. Many of her books concern themselves with lesbian identity and Jewish identity, as well as current topics such as AIDS, eating disorders, and sexual abuse. Her literary awards include Poetry Fellowships from the Massachusetts Artists Fellowship Foundation and the National Endowment for the Arts, the James Baldwin Award for Cultural Achievement, and three Pushcart Prize nominations. Nine of her books have been Lambda Literary Award finalists.
Loading...
or support indie stores by buying on
(This book is on backorder)