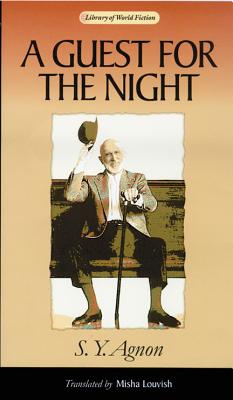 A Guest for the Night

Hailed as one of Agnon's most significant works, "A Guest for the Night" depicts Jewish life in Eastern Europe after World War I. A man journeys from Israel to his hometown in Europe, saddened to find so many friends taken by war, pogrom, or disease. In this vanishing world of traditional values, he confronts the loss of faith and trust of a younger generation. This 1939 novel reveals Agnon's vision of his people's past, tragic present, and hope for the future.
Cited by National Yiddish Book Center as one of "The Greatest Works of Modern Jewish Literature"
The Wisconsin edition is not for sale in the Republic of Ireland, South Africa, or the traditional British Commonwealth (excluding Canada.)


Praise For A Guest for the Night…

"After sixty five years since its original publication in Hebrew and a Holocaust, A Guest for the Night has not lost its poignancy. Written from the perspective of the returning native son who is painfully aware that you cannot go home again, the novel describes a Jewish society in a liminal state—a society which war destroyed and the winds of modernity, socialism, and Zionism disintegrated. Its transformation was still incomplete, yet its potential future was waiting in the wings. But history turned the future of the characters in the novel into the world's worst nightmare, and, for the modern reader, the novel itself into a prelude to tragedy."—Dan Ben-Amos

Shmuel Yosef Agnon (1888 1970) was born in Buczacz, Galicia, the village described in his novel "In the Heart of the Seas." He became one of the best known Hebrew writers in the world and was the first Hebrew writer awarded the Nobel Prize for Literature in 1966."
Loading...
or
Not Currently Available for Direct Purchase