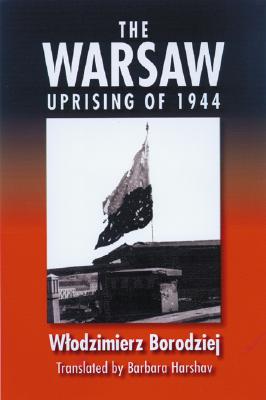 The Warsaw Uprising of 1944 (Hardcover)

The Warsaw Uprising of 1944 dramatically tells the largely unknown story of the Warsaw resistance movement during World War II. Desperate to free themselves from German military oppression but also hoping to show the advancing Soviets that they could not impose easy rule upon the citizens of Warsaw, the Poles launched an almost hopeless attack against the Germans on August 1, 1944.

Wlodzimierz Borodziej presents an evenhanded account of what is commonly considered the darkest chapter in Polish history during World War II. In only sixty-three days, the Germans razed Warsaw to the ground and 200,000 people, mostly civilians, lost their lives. The result—a heroic and historically pivotal turning point—meant that the Poles would lose both their capital and an entire generation. This concise account of the trauma—little known to English-speaking readers—will appeal to anyone interested in the history of World War II in general and is a must-read for students of Polish history in particular.

Wlodzimierz Borodziej is professor of history at Warsaw University and the author of a number of books dealing with German-Polish topics. The Warsaw Uprising of 1944 is his first book available in English.

Praise For The Warsaw Uprising of 1944…

“The hitherto most objective recounting of the ill-fated 1944 Warsaw Uprising of Polish resistance fighters.”—Focus

“This sound study is a treasure chest of information, interpretation, and insights from other scholars that constitutes an important contribution to the understanding of this historical event.”—Frankfurter Rundschau

“In 149 pages of text, [Borodziej] has explained the most tangled vicissitudes of Poland’s World War II history and described in a dramatic and moving way the resistance, the suffering, and the annihilation of Warsaw, one of the major capitals of Europe.”—Piotr Wróbel, Slavic Review
or support indie stores by buying on
Copyright © 2020 American Booksellers Association