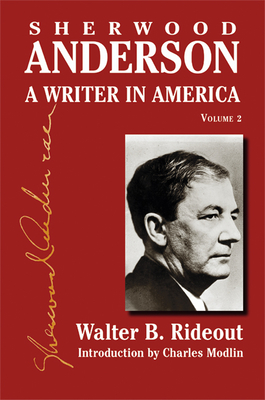 A Writer in America, Volume 2

Sherwood Anderson, an important American novelist and short-story writer of the early twentieth century, is probably best known for his novel Winesburg, Ohio. His realistic and nonformulaic writing style would influence the next generation of authors, most notably Ernest Hemingway and William Faulkner.
Walter Rideout’s Sherwood Anderson: A Writer in America is a seminal work that reintroduces us to this important, yet recently neglected, American writer, giving him long overdue attention. This second volume of the monumental two-volume work covers Anderson’s life after his move in the mid-1920s to “Ripshin,” his house near Marion, Virginia (where Volume 1 ended.) The second volume covers his return to business pursuits; his extensive travels in the South touring factories, which resulted in his political involvement in labor struggles and several books on the topic; and finally his unexpected death in 1941.
No other existing Anderson biography, the most recent of which was published nearly twenty years ago, is as thoroughly researched, so extensively based on primary sources and interviews with a range of Anderson’s friends and family members, or as complete in its vision of the man and the writer. Rideout uncovers much new information about events and people in Anderson’s life and provides a new perspective on many of his works. This two-volume biography presents Anderson’s many remarkable attributes more clearly than ever before, while astutely placing his life and writings in the broader social, political, and artistic movements of his times.

Praise For Sherwood Anderson: A Writer in America, Volume 2…

Praise for Volume 1:
“This will surely be the definitive biography of Anderson for beyond the foreseeable future. A perusal of the endnotes shows that some of Rideout’s interviews and research go back 50 years. It is difficult to believe that anyone else will put this much labor into Anderson’s life. Indeed, this book is not just praiseworthy as a superb portrayal of its subject. It is a testament—even a throwback—to the sort of dedicated, painstaking literary scholarship that is rarely seen anymore in our technophilic age."—Roger K. Miller, Chicago Sun-Times

Walter B. Rideout is professor emeritus of English at the University of Wisconsin–Madison, coeditor of Letters of Sherwood Anderson, and author of The Radical Novel in the United States, 1900–1954, for which he received the Robert F. Ferguson Award of the Friends of Literature.
Loading...
or support indie stores by buying on