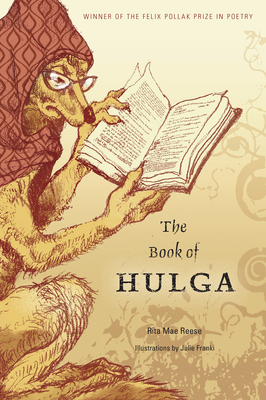 The Book of Hulga speculates—with humor, tenderness, and a brutal precision—on a character that Flannery O’Connor envisioned but did not live long enough to write: “the angular intellectual proud woman approaching God inch by inch with ground teeth.” These striking poems look to the same sources that O’Connor sought out, from Gerard Manley Hopkins to Edgar Allan Poe to Simone Weil. Original illustrations by Julie Franki further illuminate Reese’s imaginative verse biography of a modern-day hillbilly saint.

Praise For The Book of Hulga (Wisconsin Poetry Series)…

“Like the peacock lifting that magnificent tail into an arch, Rita Mae Reese’s poems of affliction and epiphany shiver and extend a structure so stunning, so moving, it’s nearly impossible to respond justly in language. Flannery O’Connor would have kept The Book of Hulga on her bedside table.”—Amy Newman, author of Dear Editor

“A mesmerizing imagination at work. The language is pared but rich, philosophical and earthy. These poems are fiercely individual, but dovetail into a narrative bright with revelations and wonder. The Book of Hulga is a triumph.”—Eduardo C. Corral, author of Slow Lightning

“To read these poems is to inhabit the body of a penitent climbing, on hands and knees, the long stone steps toward God. The book’s three crowns of finely interwoven sonnets leave no doubt that Reese is an equal to Donne or Hopkins.”—Nick Lantz, author of We Don’t Know We Don’t Know

“If this rich collection of poems on [Flannery] O’Connor’s life, family, work, and religious philosophy is any indication, the wildly talented Rita Mae Reese is part of that die-hard fan club, too. It would be challenge enough for most poets to write a compelling sequence on any great artist, but Reese doesn’t just succeed in creating moving, original poems on O’Connor—she also inhabits the rhythms, tones, and voices O’Connor used in her own work.”—Tahoma Literary Review

Rita Mae Reese is the author of the poetry collection The Alphabet Conspiracy. A past Wallace Stegner Fellow, she lives in Madison, Wisconsin.
Loading...
or support indie stores by buying on