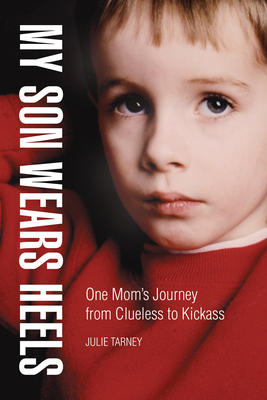 One Mom's Journey from Clueless to Kickass

Julie had no idea what that meant. She felt disoriented. Wasn’t it her role to encourage and support her child? Surely she had to set some limits to his self-expression—or did she? Would he be bullied? Could she do the right thing? What was the right thing?

The internet was no help, because there was no internet. And there were zero books for a mom scrambling to understand a toddler who had definite ideas about his gender, regardless of how Nature had endowed him. Terms such as transgender, gender nonconforming, and gender creative were rare or nonexistent.

Lacking a positive role model of her own, and fearful of being judged as a mom who was making her son “too feminine,” Julie embarked on an unexpected parenting path. Despite some missteps, and with no map to guide her, she learned to rely on her instincts. She listened carefully, kept an open mind, and as long as Harry was happy, she let him lead the way. Julie eventually realized that Harry knew who he was all along. Her job was simply to love and support him unconditionally, allowing him to be his authentic self. This story of a mother embracing her child’s uniqueness and her own will resonate with all families.

Praise For My Son Wears Heels: One Mom's Journey from Clueless to Kickass…

“Not only does the book chronicle an especially memorable mother-son relationship, it also suggests that the best parenting is the kind that does not forcibly mold a child into what he/she ‘should’ be but lovingly allows him/her the freedom to follow his/her own special path. A fearlessly open and frank memoir.”—Kirkus Review

“A vivid, heartfelt, and ultimately joyful account of one mother's journey raising a son who did not ‘do gender’ by the books. Julie Tarney shows us that there is no right so precious as our right to be different, and no greater gift we can give to our children than loving them for who they are.”—Harriet Lerner, author of The Dance of Anger

“This riveting account of parenting a gender-nonconforming child reminds us of how far we've come in the past twenty years, and also how far we have yet to go. Tarney shows us that, while there is no ‘bubble of light’ that can protect our children from all injuries, a parent's unconditional love is the most effective armor of all.”—Jessica Herthel, coauthor of I Am Jazz

“My Son Wears Heels is an unexpected page-turner, driven by the passion of a mother with no guideposts to understand and support a gender creative child. Julie Tarney poignantly lays bare her journey in frank tales about interactions with family, friends, schools, and, not least, the constant stretching of herself to be the best parent she can be. Every parent can learn from this uplifting story.”—Drew Tagliabue, executive director, PFLAG NYC

“With candor, wit, and humor, Julie Tarney lays out the struggles and triumphs of raising a child who was very clear about who he was, even when everyone else questioned it. I found myself both teary-eyed and laughing, but mostly hopeful about the future. This powerful tale is not to be missed.”—Héctor Torres, coauthor of Building a Better Man

“A memorable account of one young person’s journey toward self-identity and a valuable parenting guide for a new era of gender awareness and acceptance.”—Foreword Reviews

“Tarney does an exceptional job of tracing the zigzagging line of Harry’s self-identity and recalling the inevitable questions asked along the way.”—New York Times Book Review

Julie Tarney is a diversity, equity and inclusion speaker, trainer and executive coach who helps leaders learn how to create trans-inclusive, welcoming, and supportive organizations. She serves on the board of PFLAG NYC. Tarney was named a “Favorite Queer Hero of 2016” by HuffPost and one of BlogHer's “Voices of the Year” in 2015. A longtime resident of Milwaukee, Wisconsin, she now lives in Brooklyn, New York. Visit julietarney.com
Loading...
or
Not Currently Available for Direct Purchase