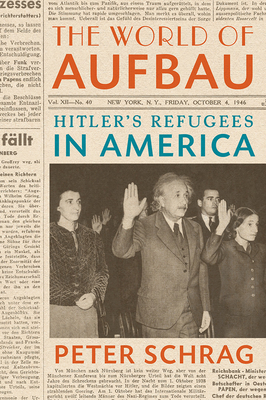 The World of Aufbau (Hardcover)

Aufbau—a German-language weekly, published in New York and circulated nationwide—was an essential platform for the generation of refugees from Hitler and the displaced people and concentration camp survivors who arrived in the United States after the war. The publication served to link thousands of readers looking for friends and loved ones in every part of the world. In its pages Aufbau focused on concerns that strongly impacted this community in the aftermath of World War II: anti-Semitism in the United States and in Europe, the ever-changing immigration and naturalization procedures, debates about the designation of Hitler refugees as enemy aliens, questions about punishment for the Holocaust and other Nazi crimes, the struggle for compensation and restitution, and the fight for a Jewish homeland. The book examines the columns and advertisements that chronicled the social and cultural life of that generation and maintained a detailed account of German-speaking cultures in exile. Peter Schrag is the first to present a definitive account of the influential publication that brought postwar refugees together and into the American mainstream.

Peter Schrag is a writer, educator, and former Guggenheim Fellow based in Davis, California. He is a refugee from Nazi Germany and has written extensively about the history and conflicts over American immigration.

Praise For The World of Aufbau: Hitler's Refugees in America…

“Schrag deftly incorporates the history of the Aufbau, the central and major newspaper of German-speaking Jews, with the story of its readers, refugees from Hitler’s Europe. In examining the tensions between retaining their culture and Americanizing, he paints a vibrant picture of a generation in transition.”—Marion Kaplan, author of Between Dignity and Despair: Jewish Life in Nazi Germany

“Aufbau represented and connected the exiled unlike any other instrument of communication. It was, so to speak, the ‘Facebook’ of the time, linking with each other the refugee communities of close to one hundred countries of exile. Schrag has managed to capture the sense of urgency, depth, and importance unlike anybody before.”—Frank Mecklenburg, Leo Baeck Institute
or support indie stores by buying on
Copyright © 2020 American Booksellers Association