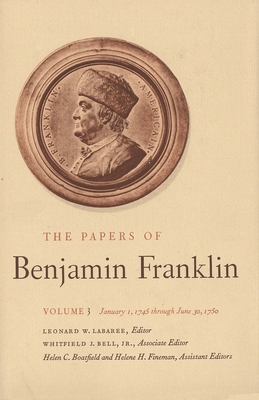 The Papers of Benjamin Franklin, Vol. 3

This latest volume in the continuing edition of one of America's most versatile citizens shows Franklin's interests, already diversified, beginning to broaden still more, until in 1748 he turns over the active operation of his printing office and newspaper to a partner in order to participate with more freedom in public affairs and scientific investigations.When in the autumn of 1747 Philadelphia appears threatened by incursions of French and Spanish privateers and the Quaker-controlled Assembly of Pennsylvania does nothing to defend the city, Franklin initiates and leads a movement to create a volunteer militia—the "Association/" The citizens build a battery and borrow canon, and Franklin organizes two lotteries to raise the necessary funds.In 1749 Franklin sets on foot a scheme for establishing the Academy of Philadelphia, which ultimately becomes the University of Pennsylvania. His pamphlet, "Proposals relation to the Education of Youth in Pennsylvania," here reprinted, is an important statement of his educational views.On the scientific side, in 1747 Franklin begins a series of letters describing the electrical experiments he and his friends are conducting. The English scientist Peter Collinson reads the letters to the Royal Society, and in 1751 they are printed in London as a pamphlet. In this excursion into basic scientific investigation, Franklin is the first to use the terms "positive" and "negative," "plus" and "minus" as applied to an electrical charge. here, also for the first time, an electric "battery" (Franklin's term) is described.This volume, containing exactly four times as many documents as that of the Smyth edition for the same period, will appeal to many different kinds of readers.