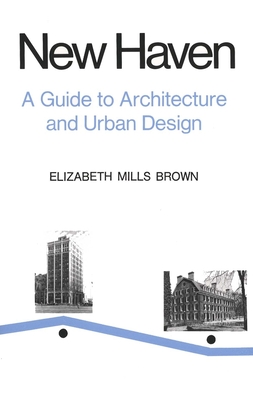 A Guide to Architecture and Urban Design: 15 Illustrated Tours

In the nineteenth century New Haven was known as one of America’s most beautiful cities. This reputation rested partly on its once-famous elms and partly on a certain quality of urban grace that long characterized the city. Starting with the original town plan of the famous Nine Squares, this concern for urban design has been a continuing tradition for three centuries, highlighted by the layout of the Green in Federal period, by the creation pf handsome squares and streets before the Civil War, by the park system of the 1880’s, and finally by the widely publicized redevelopment program of our own time.
This unique guidebook views New Haven as the product of an urban community. Elizabeth Mills Brown concentrates not only on the magnificent architecture of the Yale Campus and the spectacular works of modern architects, but also on the vernacular production of the anonymous builders whose competent designs have provided the scenery of urban life. Exploring faded backwaters as well as showplaces, she looks at the city with a fresh curiosity and a sensitivity to the tides of urban change and social history that have influenced its architecture.
The book is divided into fifteen tours, accessible by foot, bicycle, or car. Capsule descriptions and a map accompany each tour, and cross references, a chronological table of buildings, and indexes are also provided. Over five hundred buildings are illustrated, and information is supplied on another hundred. This handsome guidebook, full of pertinent data on cultural and architectural history, will be useful to students of urban design and American architecture as well as to New Haven residents and tourists.
Elizabeth Mills Brown is an architectural historian with a longtime interest in New Haven’s urban design.