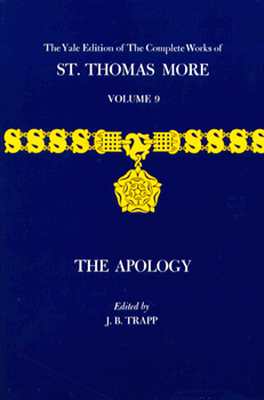 Thomas More’s Apology (1533) is one of his most significant works of religious controversy.  More’s defense focuses on an anonymously published pamphlet, A Treatise concerning the Division between the Spirituality and Temporality, issued in 1532 and generally attributed to the jurist Christopher St. German.  This tract was part of a press campaign conducted by the king’s agents.  In part, it repeats ancient grievances against the clergy—accusing them of oppression and corruption—and, more important, the Treatise attacks the ecclesiastical jurisdiction for its alleged partiality and its harsh suppression of criticism and dissent; St. German insists on the supremacy of the king and on the need for drastic curtailment of clerical power.
In the Apology, Thomas More defends both himself and the lives and actions of the clergy.  He denies the need for control by lay authority and for revision in the procedure of the church courts against heresy.  He steers carefully away from the most dangerous implication of the debate, royal supremacy.
J.B. Trapp provides a thorough introduction to and commentary on the issues addressed in the Apology.  Textual variants are placed at the foot of the text pages, and a bibliography, glossary, and index are included.  The Treatise concerning the Division is given in an appendix, as are the texts of earlier antiheretical legislation.  Another appendix gives an account of the affair of Richard Hunne and Friar Standish, contributed by J. Duncan M. Derrett.