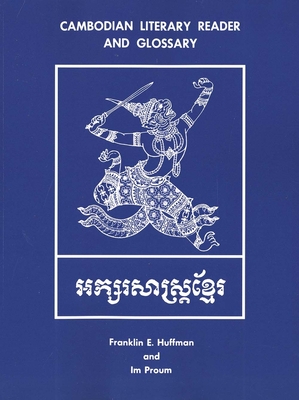 This is the third in a series of Cambodian readers prepared by Franklin Huffman and Im Proum, following their Cambodian System of Writing and Beginning Reader and Intermediate Cambodian Reader.  The reader contains thirty-two selections from some of the most important and best-known works of Cambodian literature in a variety of genres – historical prose, folktales, epic poetry, didactic verse, religious literature, the modern novel, poems and songs, and so forth.  The introduction is a general survey in English of Cambodian literature, and each section has an introduction in Cambodian.  For pedagogical reasons, the selections are presented roughly in reverse chronological order, from modern prose to the very esoteric and somewhat archaic verse of the Ream-Kie (the Cambodian version of the Ramayana).  The reader concludes with a bibliography of some sixty items on Cambodian literature.

The glossary combines the 4,000 or so items introduced in this reader with the more than 6,000 introduced in the previous two readers, making it the largest Cambodian-English glossary compiled to date.  The definitions are more general and complete than one usually finds in a simple reader glossary, in which definitions are normally context-specific.  Because the glossary is so useful in itself, it is being made available separately as well as bound with the reader.