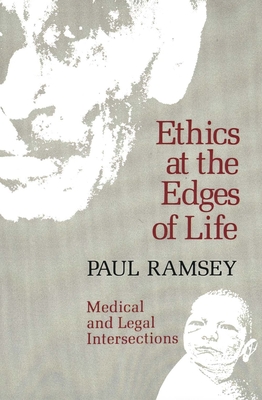 Ethics at the Edges of Life

The tremendous changes in society’s attitudes toward abortion, euthanasia, the right to die, and other related life-and-death issues are reflected in recent court decisions and in new legislation.  This important book by one of America’s leading writers in the field of medical ethics analyzes these legal issues at the ethical level, showing how our laws and practices affect and reflect the morality of our times.

Ramsey is concerned with medicine, ethics, law, and with medical and public policy.  He examines relevant laws and court decisions that make policy, but not without a healthy measure of moral argument and critical assessment.  Among the recent legal issues that he analyzes in detail are the decision of the Supreme Court of New Jersey in the Quinlan case; the rights of defective newborn infants; the Edelin negligent manslaughter case; the “conscience clauses” in our federal code and in state statutes; the Supreme Court’s landmark decision on abortion in Planned Parenthood v. Danforth; and California’s Natural Death Act.

Ramsey studies the reasoning behind the court’s decision or the law and holds up these legal processes as mirrors in which we can see reflected the state of moral questions as they are perceived by contemporary society.  A perceptive and well-informed social critic, he provides an ethical assessment of the discourse going on concerning issues of medical practice and public policy.

"What [Ramsey] has to say must be of compelling interest to everyone concerned with the moral problems of medicine, life and death and not merely to those who share his faith. This is . . . probably the single most important text in the area of medical ethics written in modern times. . . . It is a book that cannot itself be summarized; it has to be read."—Alasdair MacIntyre, The New Republic

"Ramsey forces one to think deeply and systematically about issues that cannot be reduced to maxims or formulas. His work serves both as a challenge and as an inspiration."—New England Journal of Medicine

"A monumental feat. Ramsey is neither a physician nor a lawyer, but I venture to say that he has much to offer members of each profession – and a great deal to offer the average reader. His analysis of the legal issues at the ‘edges of life’ and his critical assessment of the relevant court decisions are brimful, probing and provocative. A meaty book, beautifully written."—Yale Kamisar

Ethics at the Edges of Life was selected as an outstanding book for 1979 in the Scholarly Books category of the National Religious Book Awards.