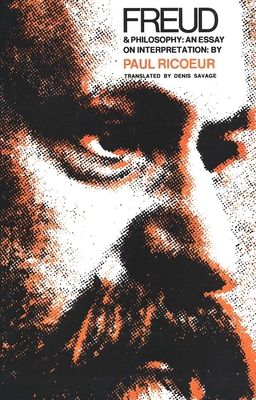 An Essay on Interpretation (The Terry Lectures Series)

If Paul Ricoeur is correct in seeing the various currents of contemporary philosophy all converging on the problem of a "grand philosophy of language," then the first sixty pages of this absorbing study of Freud may become the rallying point from which future work can begin.This first part of Freud and Philosophy, "Problematic," presents a profound and clear theory of signification, symbol, and interpretation. The second part, "A Reading of Freud," is required reading for anyone seriously interested in psychoanalysis. The third section interpretation of Ricoeur's own theory of symbol—particularly religious symbol—which places this study at the center of contemporary debate over the sense of myth.In this book are revealed Ricoeur the philosopher of language; Ricoeur the critic of Freud; and Ricoeur the theologian of religious symbol. The author is outstanding in all three roles, and the book that emerges is of rare profundity, enormous scope, and complete timeliness.Paul Ricoeur is professor of philosophy at the University of Paris. “Paul Ricouer…has done a study that is all too rare these days, in which one intellect comes to grips with another, in which a scholar devotes himself to a thoughtful, searching, and comprehensive study of a genius…The final result is a unique survey of the panorama of Freudian thought by an observer who, although starting from outside, succeeds in penetrating to its core.” –American Journal of Psychiatry
“Primarily an inquiry into the foundations of language and hermeneutics…[Ricoeur uses] the Freudian ‘hermeneutics of suspicion’ as a corrective and counter-balance for phenomenology and create a ‘new phenomenology’…This important work…should have an impact upon serious thinking in philosophy, theology, psychology, and other areas which have been affected by Freud studies.”—International Philosophical Quarterly
“A stimulating tour de force that allows us to envisage both the psychoanalytic body of knowledge and the psychoanalytic movement in a broad perspective within the framework of its links to culture, history and the evolution of Western intellectual thought.” – Psychoanalytic Quarterly
Paul Ricoeur is a professor of philosophy at the University of Chicago and the University of Paris.