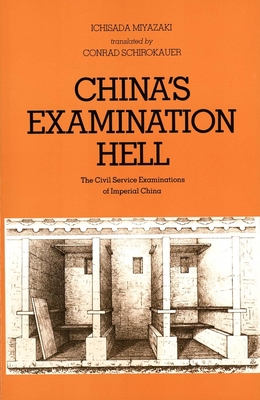 Written by one of the foremost historians of Chinese institutions, this book focuses on China’s civil service examination system in its final and most elaborate phase during the Ch’ing dynasty. All aspects of this labyrinthine system are explored: the types of questions, the style and form in which they were to be answered, the problem of cheating, and the psychological and financial burdens of the candidates, the rewards of the successful and the plight of those who failed. Drawing on a wide range of sources, including Chinese novels, short stories, and plays, this thought provoking and entertaining book brings to vivid life the testing structure that supplied China’s government bureaucracy for almost fourteen hundred years.
“Professor Miyazaki’s informative work is concerned with a system. . . that was, in effect, . . . the basic institution of Chinese political life, the real pillar which supported the imperial monarchy, the effective vehicle for the aspirations and ambitions of the ruling class. Imperial China without the examination system for the past thousand years and more would have developed in an entirely different way and might not have endured as the continuing form of government over a huge empire.”—Pacific Affairs
“The most comprehensive narrative treatment in any language of [this] enduring achievement of Chinese civilization.”—American Historical Review