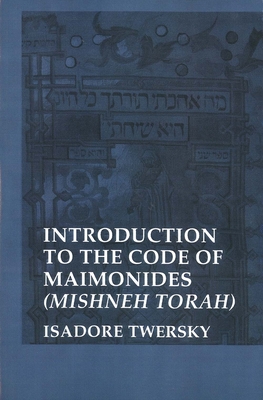 The Code of Maimonides (Mishneh Torah)

“Every once in a while a book appears that is certain to become a classic in its field. The present volume is such a work…. It goes well beyond anything that can be reasonably called an Introduction. In fact, it is now the definitive discussion of Maimonides’ thought, both philosophical and halachic (religious law) in English and one of the most important studies of Maimonides in any language.”—Choice
“Maimonides’ monumental 14-volume code on Jewish law has had a profound influence on Jewish life since the Middle Ages. This lucid study is the first thorough literary-historical study of the Mishneh Torah. Twersky … analyzes the reasons for the Code’s composition, its relationship to Maimonides’ other works, the milieu in which it was written, and illuminates the reasons for its lasting importance.”—Library Journal
Citation as Winner of the 1980 Kenneth B. Smilen Present Tense Award for the Best Book on Religious Thought:
“Isadore Twersky’s book offers us an invaluable illumination of the juridical, literary and philosophical context in which this great classic of Jewish law has to be understood. It also illumines for us the genius of Maimonides in interpreting all aspects of Jewish law and tradition. The author of this work is fully deserving of any honors that may come to him. He has created a true masterpiece.”
Also winner of a National Jewish Book Award: the Frank and Ethel S. Cohen Award for a Book of Jewish Thought.
Isadore Twersky is Littauer Professor of Hebrew Literature and Philosophy at Harvard University.