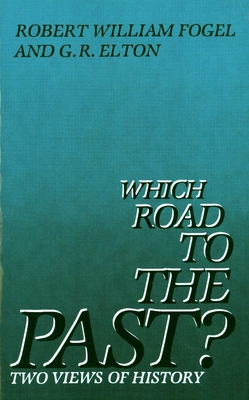 Which Road to the Past?

Two distinguished historians, one an advocate of the new scientific or “cliometric” history and the other a traditional historian, debate the validity of their respective methods of studying the past.  While they differ sharply on many issues, in the end they agree that history is a vigorous, evolving discipline able to absorb the best of both scientific and humanistic thought.
“Fogel asserts persuasively that cliometrics is best characterized by the explicit use of social science theory, and only secondly by its use of quantification…. Elton elegantly defends the traditional virtues of catholicity of method, skepticism toward sources, and informed scholarship.  The two scholars’ evident respect for each other enriches the debates as well as humanizes it.” –David Keymer, Library Journal
“Both scholars are leading representatives of their modi operandi, and both have laid down path-breaking, interpretations of their subjects of study, leaving controversy and new methodology in their wake.  It is therefore an event unto itself that two such professors of history should pause for a moment to meet at the fork in the road and debate the roads to the past.” –Mark R. Horowitz, History Today
“Anyone interested in historiography will find [this book] useful.” –Vincent A. Lapomarda, America