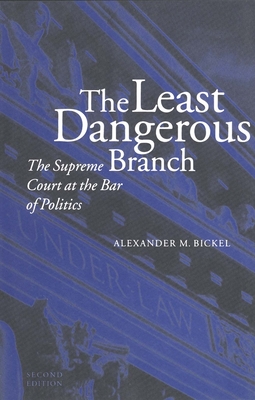 The Supreme Court at the Bar of Politics

This classic book on the role of the Supreme Court in our democracy traces the history of the Court, assessing the merits of various decisions along the way.  Eminent law professor Alexander Bickel begins with Marbury vs. Madison, which he says gives shaky support to judicial review, and concludes with the school desegregation cases of 1954, which he uses to show the extent and limits of the Court’s power.  In this way he accomplishes his stated purpose: “to have the Supreme Court’s exercise of judicial review better understood and supported and more sagaciously used.”  The book now includes new foreword by Henry Wellington.
Reviews of the Earlier Edition:
“Dozens of books have examined and debated the court’s role in the American system.  Yet there remains great need for the scholarship and perception, the sound sense and clear view Alexander Bickel brings to the discussion…. Students of the court will find much independent and original thinking supported by wide knowledge.  Many judges could read the book with profit.” –Donovan Richardson, Christian Science Monitor
“The Yale professor is a law teacher who is not afraid to declare his own strong views of legal wrongs… One of the rewards of this book is that Professor Bickel skillfully knits in quotations from a host of authorities and, since these are carefully documented, the reader may look them up in their settings.  Among the author’s favorites is the late Thomas Reed Powell of Harvard, whose wit flashes on a good many pages.” –Irving Dillard, Saturday Review
Alexander M. Bickel was professor of law at Yale University.

Praise For The Least Dangerous Branch: The Supreme Court at the Bar of Politics…

"Alexander Bickel attempted to resolve the central problem of constitutional law: Our political ethos is majoritarian, but the court, possessing the power to nullify laws democratically enacted, is countermajoritarian. The problem becomes acute when the court imposes principles not to be found in the Constitution. Mr. Bickel justified that role by saying that courts should apply principles drawn from the 'evolving morality of our tradition.' Written gracefully and offering many insights into constitutional doctrines, this book is the most intellectually honest, if unsuccessful, defense of non-originalism of which I am aware."—Robert Bork, Wall Street Journal

Named as "Five Best books on the U.S. Constitution" by Robert Bork in the Wall Street Journal