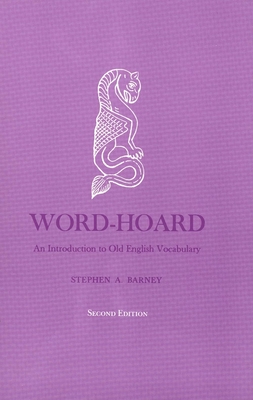 By Stephen A. Barney

Designed for introductory courses in Old English, Word-Hoard offers a vocabulary of some 2000 words drawn from the poems that beginning students normally read. Exploiting the natural curiosity we feel about our own language, Stephen Barney draws etymological connections, provides mnemonic aids, and introduces the student to cultural and literary concepts as well as words. This second edition of his valuable book has been completely reset in a format that improves its clarity and conciseness.
Reviews of the earlier edition:
“An excellent piece of work. . . . It makes learning the basic vocabulary of Old English, especially of the poetry, an adventure in ideas, adding in short compass the fascination of etymology and even semantics to the otherwise laborious and at first crude efforts to understand the texts.”—John C. Pope
“It obviously reflects enthusiasm and a great deal of hard work, and it will serve very well the students for whom it is intended.”—Thomas D. Hill, Speculum
“There is nothing quite like it in the literature. . . . Such a book would have been enthusiastically greeted years ago. It is doubly welcome today.”—Choice
Stephen A. Barney is professor of English at the University of California at Irvine.

"Superbly concise and informative."—William Schneider, The New York Times Book Review
"Witty and instructive."—Edwin M. Yoder, Jr., Washington Post Book World
"There is nothing quite like it in the literature. Word-Hoard provides the format within which a beginning student can come to learn the most frequently used words of Old-English. . . . [An] aid to memory comes from the fact that many OE words have relatives in other languages, and these relationships are carefully noted. . . . Such a book would have been enthusiastically greeted years ago. It is doubly welcome today."—Choice
"Introductory students of Old English are often fascinated with the perspective on linguistic history which learning Old English provides them; but the various dictionaries from which one can obtain etymological information are often expensive, bulky, outdated, difficult to obtain and use, and in some instances all of the above. This brief pamphlet thus fills a real need and for the most part seems to fill it well. . . . It obviously reflects enthusiasm and a great deal of hard work, and it will serve very well the students for whom it is intended."—Thomas D. Hill, Speculum
"An impressive effort . . . and a successful one. . . . Taken simply as bits of political narrative, the eight case studies make fascinating reading. . . . [Polsby's book] will make facile answers unacceptable."—Don K. Price, The New Republic
"A fascinating treatment of eight major policy innovations in recent American political history. . . . Fresh and informative."—Bruce R. Sievers, Los Angeles Times
"Polsby's analysis offers a framework that can be used to study other instances of policy initiation and opens a new area of inquiry for scholars and others concerned with political outcomes. Recommended."—Steven Puro, Library Journey
"Political Innovation in America has renewed the study of policy by giving political science a new perspective from which to approach the subject. In the end, Polsby's study is as innovative in its approach and analysis as the very polices that it examines."—Richard J. Bozzelli, Harvard Journal on Legislation
"An unusual book, one which combines the detail and texture of the elaborate case study with the general applicability of a more comprehensive  and systematic work. . . . There is no doubt that Polsby's work represents a significant advance that merits the careful attention of all those interested in the American political process."—Harold M. Waller, Canadian Journal of Political Science
"An excellent piece of work. . . . I wish someone had thought of such a book before. It makes learning the basic vocabulary of Old English, especially of the poetry, an adventure in ideas, adding in short compass the fascination of etymology and even semantics to the otherwise laborious and at first crude efforts required to understand the texts. The necessary refinements must be acquired more slowly by study of the words in their various literary contexts."—John C. Pope
"This book will have a significant impact in restoring the links between politics and public policy. It's safe to say that our understanding of both of these subjects will never be the same again."—Francis E. Rourke, Department of Political Science, Johns Hopkins University
"Accomplishes an impressive feat. He shows us how to compare major policy issues without getting bogged down in substantive detail or theoretical superstructure. The cases are well chosen—each raises issues of lasting importance. The book is good for the policy scholar and good for the classroom."—Charles O. Jones, University of Virginia
"Polsby offers afresh and typically penetrating analysis of the genesis and incubation of innovative policy ideas, their selection and advocacy by political actors, and their legitimation as adopted policies. He superbly demonstrates the creative capability of the American political system and sensitively explores the conditions for its exercise."—James W. Fesler, Cowles Professor Emeritus of Government, Yale University
"Most social scientists are tempted to choose between the reductionist approach of the systematic analyst and the synthetic approach of the historian. But for even a dim comprehension of politics one must try to combine the two, and Nelson Polsby's Political Innovation in America is one of the best recent efforts to meet this challenge. I found especially fascinating his interpretation of the way in which technological innovation makes for slowness in policy adjustments—especially in a complex democratic society."—Don K. Price, John F. Kennedy School of Government, Harvard University