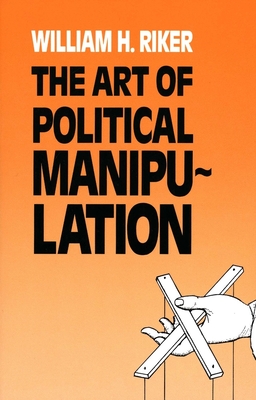 The Art of Political Manipulation

In twelve entertaining stories from history and current events, a noted political scientist and game theorist shows us how some of our heroes we as well as ordinary folk have manipulated their opponents in order to win political advantage.  The stories come from many times and places, because manipulation of people by other people is universal: from the Roman Senate through the Constitutional Convention of 1787, to the Congress, state legislatures, and city councils of twentieth-century America.
The results of manipulation are not trivial, as we see, for example, in Riker’s account of Lincoln’s outmaneuvering of Douglas in their debates and in his description of the parliamentary trick that defeated the Equal Rights Amendment only six years ago in the Virginia Senate.
The tales can be enjoyed by anyone. For the scholar, they are held together by a concluding chapter in which Riker discusses the feature of politics that all of the manipulators exploited and sketches out the new political theory that explains why manipulation works the way it does.
Preface
Lincoln at Freeport
Chauncey DePew and the Seventeenth Amendment
The Flying Club
Gouverneur Morris in the Philadelphia Convention
Heresthetic in Fiction
Camouflaging the Gerrymander
Pliny the Younger on Parliamentary Law
Trading Votes at the Constitutional Convention
How to Win on a Roll Call by Not Voting
Warren Magnuson and Nerve Gas
Exploiting the Powell Amendment
Reed and Cannon
Conclusion
“A useful and entertaining informal essay on political tactics that will have direct utility in the classroom.”—Douglas W. Rae, Yale University
William H. Riker is Wilson Professor of Political Science at the University of Rochester and a former president of the American Political Science Association. He is the author of numerous books, including Theory of Political Coalitions, a classic in the field.