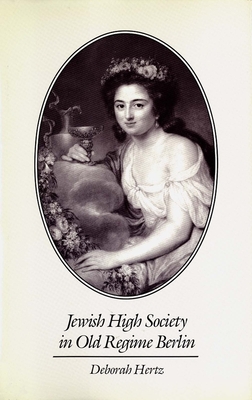 During the quarter century between 1780 and 1806, Berlin's courtly and intellectual elites gathered in the homes of a few wealthy, cultivated Jewish women to discuss the events of the day. Princes, nobles, upwardly mobile writers, actors, and beautiful Jewish women flocked to the salons of Rahel Varnhagen, Henriette Herz, and Dorothea von Courland, creating both a new cultural institution and an example of social mixing unprecedented in the German past. In this book, Deborah Hertz offers the first detailed history of these salons, using rich narrative as well as analytic social history to explain why such an institution arose and what it meant to those involved.
Hertz reconstructs the cultural and social context that nurtured salon life, describing how the salons emerged out of courtly society, commercial leisure institutions, and the city's new intellectual clubs. Using a collective biography of one hundred participants in sixteen salons, Hertz shows that there were complex social and personal motives for salon participation. Noblemen, for example, needed Jewish financiers for private loans, but they also wanted access to more progressive cultural currents. For Jewish women, salon leadership offered not only an escape from a restricted home life but also social and personal power, power that was frequently consolidated in their upwardly mobile marriages to noblemen.
However advantageous and stimulating these salons were for their participants, they were the product of a transitory convergence of social and cultural structures. Hertz concludes by exploring how both underground antisemitic gossip and the new patriotism unleashed by the upheavals in Prussia after 1806 destroyed Jewish salon life in Berlin.

"A rich, sophisticated, and original social history. It contributes to our knowledge and understanding of German history in a period whose social aspects have long been neglected by scholars. It also makes a significant contribution to Jewish history and to women’s history."—Mary Nolan, New York University
— Mary Nolan

"This impressive study tells us much that is interesting about the salons, while illuminating the whole period of which they were a part."—Gordon A. Craig, New York Review of Books

"An interesting and amusing book about this era."—Alexander Zvielli, Jerusalem Post

"An enlivening study of the era of the "Enlightenment" when in Germany, Jewish cultural emancipation was proceeding apace despite continuing legal and social humiliations. . . . The scholarly apparatus and studious analysis of material is . . . fascinating."—Stephen Massil, Jewish Book News and Review

"For the first time a serious attempt is made to ascertain precisely why the salons came to exist at this time; why in Berlin; who frequented them; and for what reasons."—Lionel Kochan, Journal of Jewish Studies

"Engaging, intelligently written. . . . The focus of her interest is the nine Jewish women who presided over salons, whose lives she has painstakingly reconstructed. . . . Hertz appears to be in full command of the dimensions of the salon phenomenon, including the social bases of intellectual life, the economic problems of the Prussian nobility, Berlin’s urban history, and the position of Berlin Jews. . . . The author has provided us a fine study of a limited subject which, fully and suggestively explored, illuminates the broad field around it."—Lloyd P. Gartner, Journal of Modern History

"Hertz has written an interesting book on a subject all too frequently overlooked by historians. . . . This book is a welcome addition to what is still an under-researched period, Germany in the late eighteenth and early nineteenth centuries."—Marilyn Shevin Coetzee, The Historian

"Scholars will welcome this book as a model of the new social history. But college students and college-educated general readers will find the book attractive as well; if they prefer to avoid the charts and statistics, they can be charmed by the descriptions of the intellectual, personal, and sometimes amorous relationships in the salons themselves."—Gordon R. Mork, History

"The book represents an important contribution on a subject that possesses intrinsic interest to student of both history and literature. It goes beyond its predecessors."—Choice

"Hertz has written an interesting book on a subject all too frequently overlooked by historians. . . . This book is a welcome addition to what is still an under-researched period, Germany in the late eighteenth and early nineteenth centuries."—Marilyn Shevin Coetzee, The Historian

"Here is an outstanding work of cultural history which brings an inexplicably neglected subject into sharp and vivid focus. . . . Crisply and readably written . . . a major contribution, not only to women’s studies, but to the sociology of the Enlightenment."—Ritchie Robertson, German History

"An enlivening study of the era of the ’Enlightenment’ when in Germany, Jewish cultural emancipation was proceeding apace despite continuing legal and social humiliations. . . . Its special appeal is to cover a neglected area of women’s emancipation, that has been both regretted and admired, since the role the salonieres carved out for themselves, was so precarious and transitory. . . . It brings to the fore the neglected social history of an otherwise well-charted period."—Stephen Massil, Jewish Book News and Reviews

"This is a lively and engaging tract . . . remarkably free from the zealousness, anxiety, and wordiness typical of the genre. . . . Hertz’ book deserves widespread use, because it is a well-researched and thought-out treatise on an important chapter in the cultural, intellectual, and social history of Germans and Jews in the two and a half decades, or so, that spelled the end of the enlightenment age and the beginning and initial highpoint of its counterpoise, the Romantic age, and finally the invasion of Prussia by Napoleon."—A. Tilo Alt, Shofar
— A. Tilo Alt