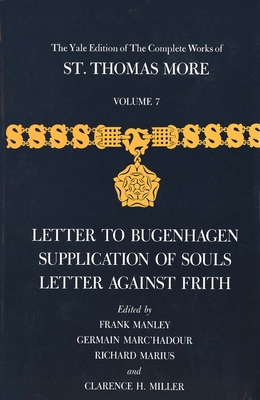 Volume 7, Letter to Bugenhagen, Supplication of Souls, Letter Against Frith

More's Latin reply to Bugenhagen (1526), given here with a facing English translation, is a comparatively brief but intense rebuttal of the principal points of Lutheran teaching concerning scripture ant tradition, faith and works, grace and free will, clerical celibacy, and the sacraments. It presents arguments elaborated at much greater length in More's other polemical works. Supplication of Souls (1529) refutes A Supplication for the Beggars, an anticlerical pamphlet by Simon Fish which Henry VIII seems to have regarded with some favor. More places his response in the mouths of the souls in purgatory. In the first book, he contemptuously demolished Fish's loose railery with accurate statistics and historical analysis. In the second, he defends the traditional doctrine of purgatory with brief arguments drawn from reason and a detailed analysis of scriptural passages. Letter against Frith (1532) answers John Frith's Zwinglian arguments against the physical presence of Christ in the more. Written to an unknown correspondent, it is the briefest and mildest of More's polemical works and anticipates arguments presented moer elaborately in More's The Answer to a  Poisoned Book (1533).
Besides full introductions and commentaries, a glossary, and an index, this volume contains seven appendices giving the works to which More is replying and other thematic, historical, and bibliographical matter closely related to the three works by More.