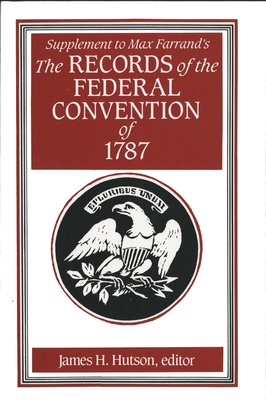 Supplement to Max Farrand's Records of the Federal Convention of 1787

The Federal Convention of 1787 engaged in the great and complex labor of framing the Constitution for the union of the states. For thirty years afterward, little was known of its deliberations, and nothing official was published about them. The variety of versions that began to appear thereafter tended to confuse rather than clarify the situation.
In 1911 all available records that had been written by the Convention participants were gathered together by Max Farrand and published in three volumes as The Records of the Federal Convention of 1787. A Revised Edition by Farrand, published in 1937, incorporated in a fourth volume material that had come to light after the first printing. Now, two hundred years after the Federal Convention, a Supplement to Farrand’s authoritative source is available. Edited by James Hutson, this volume includes documentary material discovered since the appearance of the 1937 edition.