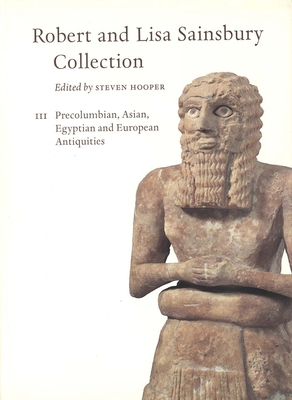 The Robert and Lisa Sainsbury Collection at the University of East Anglia, Norwich, is considered one of the greatest art collections of the twentieth century. It originated in the 1930s when Robert Sainsbury, a collector of private press books, began to acquire works by Epstein and Moore as well as sculptures from China and Africa. After their marriage in 1937, Robert and Lisa Sainsbury embarked on "an unplanned voyage of discovery in the world of art," says Steven Hooper in the introduction to this three-volume set. With abundant illustrations, the set catalogues the holdings of the extensive Sainsbury Collection in three volumes: European 19th and 20th Century Paintings, Drawings and Sculpture; Pacific, African and Native North American Art; and Precolumbian, Asian, Egyptian and European Antiquities.

As the Sainsburys' collection grew, it came to include a broad range of works by such artists as Moore, Giacometti, and Bacon, from such widespread locations as Polynesia, Alaska, Western Africa, Mesoamerica, Japan, and the Cyclades. Presented as a gift to the University of East Anglia in 1973, the Sainsbury Collection has grown considerably with continued acquisitions and is today housed in Norman Foster's remarkable Sainsbury Centre for the Visual Arts. University and museum scholars from Europe, America, and Japan provide entries for this catalogue, which will serve as a rich resource for art historians, anthropologists, and archaeologists. For general readers, the set offers an accessible introduction to a range of art from many periods and cultures.

Steven Hooper is director of the Sainsbury Research Unit for the Arts of Africa, Oceania, and the Americas at the University of East Anglia.
or
Not Currently Available for Direct Purchase
Copyright © 2020 American Booksellers Association