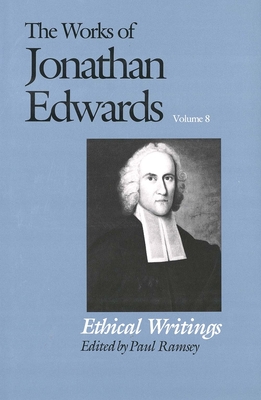 The Works of Jonathan Edwards, Vol. 8

This volume contains two major works of Jonathan Edwards: an unpublished text of a series of sermons he preached in 1738, known as Charity and Its Fruits, and his Two Dissertations: I. Concerning the End for Which God Created the World and II. On the Nature of True Virtue, published posthumously in 1765. Together these writings set out the principles of Edwards’ ethical reflections.
The text of the sermon series is drawn from three sources. The primary text is an early nineteenth-century transcription of Edwards’ sermon booklets now in the Andover-Newton Theological School’s collection. Passages published in Tyron Edwards’ 1852 edition, and partial transcriptions by Joseph Bellamy found in three fragments among his papers, have been used where the Andover copy is incomplete. The Bellamy fragments are reproduced in their entirety in a critical appendix, along with examples showing the editor’s use of the three sources in construing this definitive text for the Yale edition.
End of Creation and True Virtue, intended by Edwards to be read together, are shown here to be closely related to Edwards’ other writings. Paul Ramsey’s introduction points out that Edwards returned again and again to these topics in his Miscellanies, where he identifies penultimate versions of both treatises and traces the development of Edwards’ ideas. Thus the reader is able to follow Edwards’ most profound reflections about God and the moral dimensions of his creations.
This is one of the most wide-ranging theological and philosophical volumes projected in the Yale edition. The Editor’s Introduction gives a systematic analysis of the theological ethics to be found in these writings and of Edwards’ esteem for the splendor of common morality. Appendices exploring the “moral sense” school, “infused” virtue in Edwards and Calvin, and Edwards’ belief in the never ending increase of holiness and happiness in heaven complete the volume.