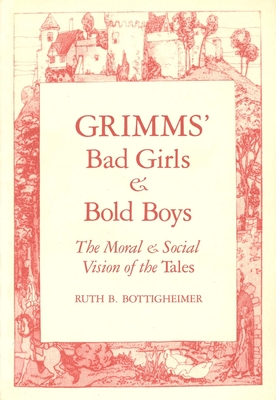 The Moral and Social Vision of the Tales

The fairy tale collection of the brothers Grimm has been a central document in German social and literary history for generations, mined for various purposes by scholars of many persuasions.  This book, the first in more than fifty years to examine the entire body of tales, provides a thorough content analysis, focusing in particular on the use of gender in the stories.

Ruth B. Bottigheimer’s close analysis of several major editions of Grimms’ Tales reveals coherent patterns of motif, plot, and image and also affords insight into the moral and social vision of the collection.  Bottigheimer discusses, for example, the relationship between transgression and punishment, noting that gender distinctions rather than the severity of the sin determined the consequences of transgressing prohibitions.  She finds that in the course of the Tales’ editorial history, speech was systematically taken away from women and given to men.  She shows how common elements unite images and themes as disparate as abandonment in the forest, subliminal eroticism, violence, and Christianity in the Tales.  And she treats their social and ethical bases, analyzing such aspects of the plots as the workings of the judicial process and the relation of anti-Semitism to the economics of work and money.

According to Bottigheimer, Freudians praise fairy tales as contributing to children’s moral education; although Jungians recognize the gender distinctions inherent in the tales, they treat the collection ahistorically, ignoring its nineteenth-century German origins.  By combining a sociohistorical analysis of these stories with close scrutiny of the language in which they are told, Bottigheimer radically alters the uses to which Grimms’ Tales can be put in the future by historians, psychologists, feminists, and educators.