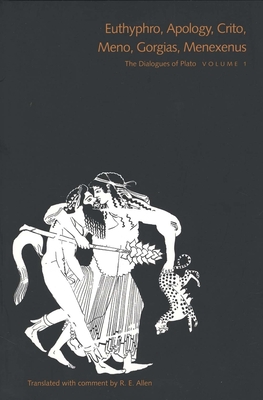 The Dialogues of Plato, Volume 1

"An important event in the world of scholarship.”—London Review of Books

This initial volume in a series of new translations of Plato’s works includes a general introduction and interpretive comments for the dialogues translated: the Euthyphro, Apology, Crito, Meno, Gorgias, and Menexenus.

“Allen’s work is very impressive.  The translations are readable, lucid, and highly accurate.  The general introduction is succinct and extremely clear.  The discussion of the dating of the dialogues is enormously useful; there has previously been no brief account of these issues to which one could refer the student.  Finally, the particular introductions are first rate: fine jobs of clear philosophical and historical explanation—succinct and yet sophisticated, both close to the text and philosophically incisive.”—Martha Nussbaum, Brown University

“This is an important work that deserves our respect and attention.”—Ethics

“Allen is a superb translator, whose elegantly simple yet precise language gives access to Plato both as a philosopher and as a literary artist.”—Library Journal

"Allen's translations are accurate and readable. . . . The volume deserves to be welcomed and widely used: I look forward enthusiastically to its successors."—Andrew Barker, Times Higher Education Supplement

"Allen is a superb translator, whose elegantly simple yet precise language gives access to Plato both as a philosopher and as a literary artist. Recommended for academic and large general collections."—Richard Hogan, Library Journal

"The present volume includes a general introduction with a valuable discussion of the dating of the dialogues, excellent individual introductions keyed to the translations by shared headings, occasional footnotes, and a brief index made up largely of proper names. Appropriate for most students, from secondary school up."—N.A. Greenberg, Choice

"This is an important work that deserves our respect and attention."—J.B.W., Ethics

"This series, when completed, will constitute a set of translations of all of Plato's work, along with prefatory commentary, from the hand of a single translator. . . . Both the translator and the publisher deserve praise for having produced a volume which augurs well for the remainder of the project. . . . The translations on the whole are highly accurate, and follow the Greek text closely in nuance and structure."—Donald J.  Zeyl, Classical World

"This and the promised succeeding volumes will probably become the standard English version of the complete dialogues. . . . This seems likely both because of the accuracy, clarity, and literary excellence of the translations themselves and because of the extremely insightful commentaries which precede the dialogues as a whole and each dialogue individually. The commentaries take advantage of the best scholarship, judge judiciously between divergent views, and often introduce new and brilliant interpretations. This is true both in the area of philosophy and in that of literary criticism."—Anthony C. Daly, S.J., Modern Schoolman

R.E. Allen is professor of classics and philosophy at Northwestern University.
Loading...
or
Not Currently Available for Direct Purchase